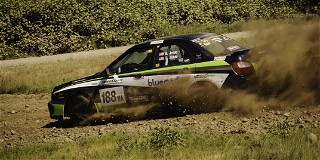 The 2017 DirtFish SCCA RallyCross® National Championship is right around the corner.  Being held this year October 20-22 at Heartland Park Topeka in Kansas, the event already has 113 entries, which will likely break the previous record of 109 competitors set in 2014 at I-80 Speedway in Greenwood, Nebraska.

The cap for this year’s event is 125 entries, so there are only a handful of spots still open.  If you’ve ever thought about giving RallyCross a go, now is the time.  And, as you’ll see below, there’s more than one way to get behind the wheel and have some fun.

RallyCross is widely recognized as one of the least expensive ways to race. Unlike most forms of racing, roll cages are not required and inexpensive street legal vehicles are the norm, eliminating most of the expense of traditional racing. But did you know there is another way to significantly reduce the cost even further? There is: dual driving. This is where two competitors share one vehicle in the same race.

How? In RallyCross, cars do not compete continuously like in road course racing. Drivers race one lap at a time. While one car is on course racing, the others are paused and waiting their turn. This is when dual drivers trade their car back and forth. Not only can this effectively cut the cost of racing in half, it guarantees both drivers are competing against each other with identical equipment.

There are about as many ways to share the costs as there are types of cars to race. Some drivers start with a co-ownership agreement before purchasing a car. This enables them to split all vehicle costs 50/50 across the board.

More commonly, one person who already has a car will partner with somebody who doesn’t. In this win-win scenario, the owner significantly reduces his or her racing costs while a new driver enters the sport without having to purchase and store a vehicle. In agreements such as these, drivers will typically pay their own entry fees, but from there the cost-sharing gets creative.

Consumables such as fuel and oil are often split or traded for the day’s food. Some operate under a “You break it, you pay for it” understanding. Typically, this applies to anything damaged while racing and not wear and tear parts. If there is a significant investment, such as a truck and trailer to transport the car, the owner might charge a set rental fee. Some owners prefer to have the final say regarding parts selection and what events to enter, so they simply pay all the vehicle costs. Others share repair work and tools rather than money. Relationships outside of the car also affect how expenses are shared. As one racer put it, “My other driver is my kid, so I pay for everything.”

Just about anything goes, so grab a friend and a cheap car and come join in the fun at the 2017 DirtFish SCCA RallyCross® National Championship in Topeka, Kansas!

Photo and Words by: Greggar Helgeland