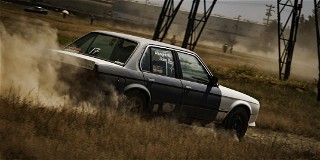 If you dream of speeding down dirt roads in a rally car but your budget won’t allow it, SCCA® RallyCross® is for you. But before you think it’s just rally for kids, think again. RallyCross has many of the same attributes, thrills and fun as stage rally, even though it can be done on the cheap. It’s ideal for honing driving and mechanical skills without breaking the bank and it’s the perfect starting point for getting involved in rally.

Stage rally is raced on public dirt roads, often in national forests. Though the terrain is typically beautiful, it’s a large endeavor requiring a great deal of expense. RallyCross keeps the price low by racing in smaller settings, often a field or vacant lot. But that’s not to say it lacks competition. While some teams do field dirt-cheap cars, the competition ranges all the way up to highly modified race cars that compete at the national level.

Stage rally veteran Shannon Jidas explains, “There are a lot of parallels between RallyCross® and stage rally. Course inspection is vital in stage rally, where it’s done while driving, and in RallyCross, where the competitors walk the course. Noting surface changes, identifying possible hazards and analyzing corner entrances, apexes and exits are vital to both forms of rally. Knowing your car and how to quickly change a tire or fix mechanical issues with minimal tools can be the difference between winning and losing in both stage rally and RallyCross.”

“I started participating in RallyCross by riding with my husband while he raced,” Jidas continued. “It didn’t take long for me to realize I needed to be behind the wheel. I thoroughly enjoy the challenges of racing on gravel. There is no greater thrill than steering with the throttle, reading the ever-changing surfaces and strategizing weight transfer in real time. RallyCross was a great way for me to get into the sport, learn how to drive sideways and how to fix the car. For the cost, RallyCross is unparalleled in what it offers.”

RallyCross is also the path of least expense to get into stage rally. Jidas says, “The transition from RallyCross to stage rally wasn’t that difficult or financially stressing. When I expressed an interest in stage racing, the rally community stepped up by offering me co-driving opportunities and loaner safety gear until I could afford my own.”

Find your SCCA region’s next RallyCross and join in the fun!