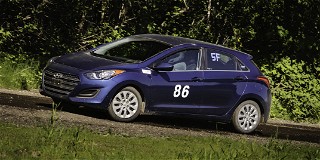 We recently sat down for a two-part interview with DirtFish Rally School instructor Kathy Hardy to talk specifics about getting into RallyCross®.

Q: What’s easier to start with? Manual or automatic transmission? What about front, rear or all-wheel drive?
A: “I don’t think it really matters between manual and automatic, but I do think that FWD is a great way to get into RallyCross,” Hardy said. “Even though I prefer driving RWD and AWD, I think FWD really lends itself to RallyCross®, especially if you are new or you’re racing on a challenging course where RWD might be a bit much to handle. AWD is fun, but it is more expensive to run, so I usually encourage my DirtFish students to get a cheap FWD car and go to their first event as soon as possible. For example, we went to our first RallyCross with a 20-year-old Civic that had been sitting in our garage. Of course, this isn’t a requirement, so if you prefer RWD or AWD, just run with it. It’s more important to just get out there and get after it!”

Q: Are most competitors racing AWD Subarus?
A: “Yes, you will see a lot of Subarus, but there are FWD, RWD, and AWD categories, and within each of those there are stock, prepared, and modified classes, so you will be competing against similarly prepared cars with the same drivetrain,” Hardy said. “I always get a kick out of seeing the amazing range of cars you would not expect at a RallyCross.”

Q: How much wear and tear should one expect from a RallyCross?
A: “The courses vary in how tough they are on cars, but they’re always set up to minimize damage as much as possible,” Hardy said. “Grass is nice and is generally pretty easy on cars provided you don’t cross big ruts. Gravel is typically smooth. If the event is particularly muddy, you’ll want to wash your car before it dries. Also, give your car a quick inspection a week or so before the race so you don’t have any surprises on race day. As with all forms of racing, it’s a good idea to look things over after the event, as well. Competing in a daily driver is common. After our Honda died, we picked up a $2,000 BMW that we used for commuting and to race in RallyCross and hill climbs.”

In the next segment, we’ll talk RallyCross car preparation.