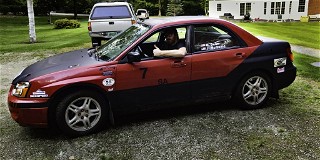 On the morning of May 13, Rufus Chaffee was not a car guy. Before the sun set, he was a race car driver. This is the power of SCCA® RallyCross®. All it took was the fun and excitement of one racing experience for Chaffee to realize he needed RallyCross in his life.

Chaffee, a sports fan from Massachusetts with a background in running and film, had never heard of RallyCross until friends started competing and talking about how much fun it was. He then drove at Mt. Snow in Vermont with his friend, Rob, basically going in cold as a competitor.

“It was both terrifying and exhilarating at first, but as I learned how to handle the car it was the most fun I’d had in quite some time,” Chaffee said. “The funny thing is we didn’t even finish because the car broke down, but it was really cool to see our competitors help try to get it running again.”

Chaffee immediately started planning to purchase a car to race. Initially, he thought it would take a year. But creative financing and adding a teammate shortened the timeline dramatically. Then Rob put his Subaru up for sale after an upgrade. Chaffee didn’t hesitate. The car had been raced by four prior RallyCross competitors, something that appealed to Chaffee.

“That was one of the things that attracted me to the car,” Chaffee said. “Not only was it an Impreza, it had been battle tested and had a good ownership history.”

He’s looking forward to the next race after the positive experience of his first. “Coming from film, I know how difficult it is to organize something with a lot of moving pieces. I was really impressed with how smoothly everything went and how everybody jumped in to do their part when they weren’t racing. Out on course, I was able to also see other cars run and how they approached it, which helped my learning process. It’s competitive in that you want to do your best, but there’s no ill will between competitors. It was pretty obvious that everybody supports everybody else regardless of experience or skill. It’s such a positive atmosphere with everybody wanting to help each other out.”

When asked if he’s turning into a car guy, Chaffee responds, “Definitely. I just spent the weekend at Rob’s helping him swap suspension.” As always with RallyCross, the help goes both ways.