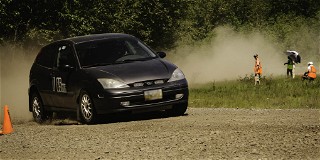 If you’ve watched rallycross racing on television or on the Internet, you might think it involves jumps, frequent crashes and missing bodywork. While those things are part of some forms of rallycross, they are not part of SCCA® RallyCross®. In RallyCross®, competitors race one at a time. Rather than a group of cars racing together toward the finish line, drivers race individually against the clock. After a set number of runs, whoever has the lowest cumulative time is the winner.

For most competitors, RallyCross® is an inexpensive form of racing. Unlike almost all other types of racing, not all cars are required to have roll cages, which is one of the primary financial hurdles of racing. The cars are also not required to be modified, which in most forms of racing renders them illegal for street use, thus requiring a truck and trailer to get to the racetrack. While modified cars are certainly welcome to compete, many RallyCross® competitors simply drive their daily commuter cars to the event and race them. There are also no requirements for race seats, harnesses or fire suits. All you need is a vehicle in safe condition and a helmet and you can race!

The defining element of RallyCross® is the surface. Unlike traditional racing on a paved course, RallyCross® is held on dirt or grass. Having a soft surface that gives is what allows drivers to frequently get their cars sideways, adding a level of dynamics to the racing that asphalt does not offer. And unlike a paved course between walls or guardrails, the courses are set with orange plastic cones, so a mistake doesn’t mean vehicle damage. RallyCross® uses a race/work system in order to maintain the course. Typically, competitors race for half of the day, then during the other half are out on course picking up the occasional cone after it’s been hit.

But even with all the fun had while racing, just about anybody will tell you that the best part of RallyCross® is the people. Like all forms of racing, RallyCross® attracts energetic characters that are vibrant, full of life and incredibly passionate about sharing the sport they love. Spectating is usually free and is a great way to learn more. At most events, you can even borrow a helmet and ride along with a racer. Find your local SCCA chapter and come out for a RallyCross®, we’d love to see you!