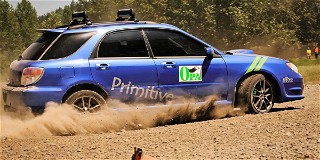 Saturday’s school started with classroom instruction and quickly moved out to the hallowed grounds of DirtFish. With expert instructors giving advice from the passenger seat of her Subaru, Hoover gained confidence and speed quickly. Racers of all skill levels are welcome to attend the school and, like many, Hoover is no longer a novice. She explains, “This is only my second year and I have already learned so much. At my first RallyCross, my car handled horribly. I understeered everywhere, I got lost on course and I’m pretty sure I was dead last.”

Even with that challenging introduction to RallyCross®, Hoover knew it was just what she needed. She says, “I’ll never forget how happy I was that I had found exactly what I was looking for in a car-related sport. On top of that, to be scooped up into a family so quickly was such an incredible feeling.”

Hoover purchased her 2007 WRX to go snowboarding, but she quickly found herself laughing while driving sideways in the snow. Rally was the logical next step. An experienced machine shop technician with mechanical skills, Hoover quickly got to work prepping her car herself for RallyCross®.

With some instruction and a handful of races under her belt, Sunday’s race went far better than her first, with Hoover surprising herself by taking 12th in a field of 22 competitors. Along for the ride out on course was her friend Crystal Stegman, an avid SCCA® Solo® participant.

But for Hoover, placing high is never the priority, “It’s not about being the best girl, or better than the guys, or the best racer overall. It’s about driving hard, bringing out the potential in your vehicle, chasing your shadow and laughing while sliding sideways. It’s about feeling the difference in handling with all the changes you’ve made to your car, learning alongside your buddies and screaming for them as they round the last turn and hammer toward the stop box. This sport, just like everything in life, is what you make it. You can get super serious and competitive, or do like I do and party with your friends in the dirt.”

Perfect weather and a large, holiday-weekend crowd of RallyCross® spectators ensured Hoover wasn’t the only person enjoying the party.

Photo: Savannah Hoover puts her WRX through the paces at a RallyCross
Photo Credit: Greggar Helgeland