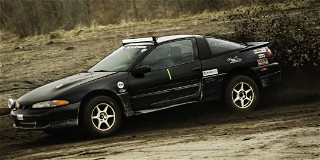 Portland RallyCross® racer Kory Nelson traveled to Heartland Park Topeka in Kansas to field his 1992 Eagle Talon in the 2017 DirtFish SCCA® RallyCross Central National Challenge. While enjoying brilliant spring sunshine, he went on to take second place in Modified – All Wheel Drive behind Janis Dancis of Denver, Colorado in his Mitsubishi EVO.

“Everybody in the pits was just as friendly and helpful as they are at home. The competition stayed out on course and didn’t reach into our personal interactions,” said Nelson. He found the competition to be similar to that at home, attributing this to the strength of the competitors in the Pacific Northwest, most notably last year’s National Champion, Bryan Rodgers, who races in Oregon and Washington. “The vibe was just as fun as our local events and not entirely about winning.”

Nelson didn’t need much of that help from his fellow competitors after an offseason that included many upgrades to his car. With a new transmission, suspension and other assorted goodies, “All four wheels were grabbing hard and the car ran great.” Unfortunately, a poor tire choice early on Saturday set him back. Figuring the surface would be quite soft once the field worked through the grass, he went with his best rubber for mud. Instead, the surface held up.

After changing what he could before Sunday, he began to make up the six seconds between him and eventual winner Dancis, but with only five laps to close the gap, it proved to be too much. “The new suspension handled the big stuff amazingly well and the motor pulled strong, but it was clear I wasn’t going to catch the leader. Knowing that I’d have to hit a lot of cones to lose second, I chose to overdrive the car on the last lap to get to know the new setup as best I could.”

Nelson also noted the amenities and professionalism of the event, attributing them to help from title sponsor DirtFish. “There was an arch at the start, an RV for officials, a sound system for announcements and live timing via the SCCA RallyCross app. Race management was very professional and staging, start order and work assignments were closely monitored.”