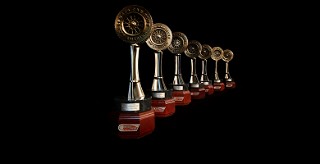 LAS VEGAS, Nev. (Jan. 21, 2017) – Eight individuals who have made significant contributions to the Sports Car Club of America® and the world of motorsports became official members of the SCCA® Hall of Fame Saturday evening during the Awards Banquet that closed out the 2017 SCCA National Convention at the South Point Hotel and Casino in Las Vegas, Nevada.

The 2017 Hall of Fame class includes Peter Brock, Dennis Dean, Larry and Linda Dent, Joe Huffaker Sr., Lyn St. James, Phil Hill and Jim Kaser.  These latest inductees join 67 others in the Hall of Fame as those who have positioned the building blocks that elevated SCCA’s stature in the motorsports world for more than 70 years.

Peter Brock, at only 19 years old, was the youngest designer ever hired by General Motors.  In November 1957, at only 21 years old, he drew the sketch which GM VP Bill Mitchell picked to become the Stingray.  A native of the San Francisco Bay area, Brock also began racing with SCCA around that time.

In 1965, Brock started Brock Racing Enterprises which later became Datsun’s West Coast factory race team competing in SCCA D Production races with Datsun 2000 roadsters.  In 1970 and 1971, BRE took on C Production with 240Zs and earned national championships.  He followed that up in 1971 and 1972 with 2.5 Trans Am® national championships in Datsun 510s.

“For me, the SCCA was the beginning of my life’s involvement with cars,” Brock said.  “We really put Japanese cars on the map here in the United States, and I hope to think my involvement in the SCCA helped elevate the Club to a more ‘international’ level.”

Dennis Dean began his involvement with SCCA as a tech inspector due to his interest in all things mechanical.  Because of his insight as a tech inspector and his Navy training, his documentation with respect to tear-down checklists and other procedures have kept many stewards out of trouble over the years.

At the Regional level, Dean provided Washington D.C. Region a wonderful set of standards that are still being used today.  He later joined the SCCA stewards program where his unparalleled technical excellence served him and the Club well. But beyond that, Dean exemplified all the personal attributes that have been stressed to SCCA stewards.

“This means an awful lot to me.  It’s very humbling,” Dean said about joining the Hall of Fame.  “You look at who is in our Hall of Fame and it’s friends and acquaintances, but it’s also heroes. I was totally taken aback when I learned I’d been nominated.  It took a while for the news to sink in.  To become a part of the fundamental history of the Club, that’s pretty amazing.”

SCCA members Larry and Linda Dent designed the SCCA Safety Steward program, a vital initiative that has improved motorsports safety as a whole.  Since 1967, Larry has been an SCCA Chief Steward.  He also served the SCCA for nine years as a member of the Board of Directors.  He was a member of the Executive Committee, serving as liaison to the Competition Board.  He also helped as Chairman of the Board of the SCCA Foundation, serving three years in that capacity during which time he significantly improved the Foundation’s financial standing. And while Larry is the one that held the “official” titles, make no mistake that he and Linda worked as a team over the years to advance the Club.

“It was a shock when we learned about being inducted into the Hall of Fame. It means so much to have my wife inducted with me,” Larry said.  “The one thing we want to emphasize above everything else, you get out of this Club what you put into it.  My wife and I put a lot into it, and we’re proud of that.”

For more than 30 years, Joe Huffaker Sr. was one of the most successful racecar constructors.  In 1954, he was contracted to build an Austin-Healey Special.  The car, known as the Huffaker-Healey, was a common site in the late 1950s on race tracks in Northern California.   In 1959, Huffaker joined British Motor Cars in San Francisco to open a competition department.  Known as BMC Competition Department, this effort spawned a very successful string of cars including the BMC Formula Juniors and Genie Sports Racers.  During this era, BMC Competition Department became one of the largest racecar manufacturers in the United States.

“I really appreciate being involved in the SCCA all my life,” Huffaker told Saturday’s audience via Skype. “Thank you for including me in the SCCA Hall of Fame.  It’s a big honor for me.”

Lyn St. James started in Florida as a racer in Showroom Stock classes, and was the 1976 and 1977 Florida regional champion.  A two-time class winner at Daytona, a class winner at Sebring, and a class winner at the 24 Hours of Nürburgring, she has also competed at Le Mans and was a 1988 record speed holder of 212.577 at Talladega in a Ford Thunderbird.  James entered 53 SCCA Trans Am races and was a top-five finisher seven times.  She also entered 62 IMSA GT races, and was a top-five finisher 17 times.  She is the only woman to win an IMSA GT race driving solo, when she won in 1988 at Watkins Glen.

“This is obviously a very big honor,” St. James said.  “SCCA is what started me on this journey and I’m glad they remembered me.”

The only American-born racer to ever win the World Drivers’ Championship, Phil Hill was one of the first dozen members of the California Sports Car Club.  He began his storied career wrenching on others’ cars and went on to compete in major SCCA races. He piloted assorted Alfa Romeos, OSCA’s and various Ferrari’s for wealthy car owners, and quickly gained a reputation as the man to beat in West Coast racing.

In 1955, Hill was the SCCA Champion in D Modified, driving a Ferrari to wins in 8 of 14 races, including the inaugural event at Road America.  He began racing outside the U.S. that same year, which later landed him a drive with Ferrari in Formula One.  But beyond Formula One, Hill exhibited a great deal of prowess as an endurance driver. He was an overall winner at Le Mans and Sebring three times, and became Sports Illustrated’s 1959 Sports Car Driver of the Year.

Alma and Derek Hill, Phil’s wife and son, were at the banquet Saturday night to accept the award.  Derek said, “My father was forever talking about the SCCA.  It was the beginnings of his career back in the early ‘50s.  SCCA is the fabric of motorsports in America and it’s great for my father to be honored like this.”

It was Kaser’s success with these series that resulted in the most significant change ever to the Sports Car Club of America. The organization turned from being an amateur’s club to a professional, international sanctioning body and organizer.

Anastacia Kaser, Jim’s daughter, and Eric Duncan, Jim’s grandson, were on hand Saturday evening to accept the Hall of Fame award.  Anastacia noted that, “Jim was really pleased to hear he was being honored in this way, and he was really happy to be inducted with such a great group this year.”

Eric added, “’Pop’ was someone that helped evolve the Club in a lot of different ways and I’m sure he’d want to see the Club continue to evolve.”

A handful of Club awards were presented Saturday evening, too. The Woolf Barnato Award went to Jim Rogaski, of the San Francisco Region.  This is the SCCA’s highest award and is presented to a member who has made an outstanding, long-term contribution to the Club.

The Member of Excellence Award was presented to Sydney Davis Yagel, of the Houston Region. This award is given to an SCCA member who provided a great contribution to the Club during the previous 12 months.

The John McGill Award was earned by Allen Davis, of the San Francisco Region, and Dave Kettler, of the Milwaukee Region.  This honor is presented for significant contribution to the Club Racing Program. The winners were chosen by the Club Racing Board and the Vice President of Club Racing.

The RallyCross Dirty Cup was awarded to Warren Elliott, of the New England Region. This accolade is presented by the RallyCross Board in recognition of an individual’s extraordinary contribution to the sport of SCCA RallyCross over time.

The Robert V. Ridges Award was presented to Mike Thompson, of the Land O'Lakes Region. This award is presented to the SCCA member who exemplifies the highest degree of dedication and sportsmanship in Road Rally, and who has made an outstanding contribution to the success of an event. This is the first time this award has been presented in five years.

Brian Linn, of the Cal Club Region, also picked up the President’s Cup awarded to the SCCA driver demonstrating ability, competitiveness and success at the SCCA National Championship Runoffs®.  And Cindy Duncan, of the Central Kentucky Region, was presented the SCCA Solo Driver of the Year, which is awarded to the competitor who demonstrated exceptional skill or overcame major obstacles to produce an outstanding performance at the Tire Rack SCCA Solo® National Championship.

To close out the banquet and 2017 National Convention, SCCA VP and COO Eric Prill announced that the location for the 2018 SCCA National Championship Runoffs will take place October 16-21 at Sonoma Raceway in Northern California, a venue where the Runoffs have never previously been held.