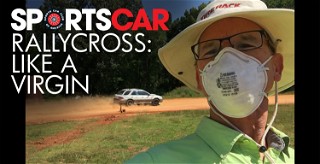 This article first appeared in the August, 2016 edition of SportsCar Magazine. SCCA members can read the current and past editions of SportCar digitally here after logging into their account; To become an SCCA member and get SportsCar mailed to your home address monthly in addition to the digital editions, click here.

Like a virgin: dirt for the very first time. That was how I felt, shiny and new. I’ve been eyeing SCCA RallyCross for a while; catching those drifty SportsCar shots of Subarus throwing rooster tails that obscure most of the car. I’ve always been a closet rally dreamer, and this is an easy way to stick a toe in the muddy water.

Years ago, I did get thrown onto Pikes Peak by the Bridgestone Supercar Series, back when it was all dirt. Best thing I ever did in a car, and I managed not to launch myself off the mountain like I did last year with Pikes Peak Racing’s Nissan GT-R. Leading at the time, of course. After all these years hooked up, sliding on purpose is an urgent call.

I live outside Atlanta, and this region has started running events at a giant off-road park called Durhamtown, way out in the boonies. They use a simple circle track and infield meant for side by sides.

With no current racecar working, I drove down in my Volvo V70R hot all-wheel-drive wagon. It’s very clean, and kind of low, but I have a lot of friends, and figured I’d have a look and then go begging if it didn’t seem right for the Volvo. I walked the course and went begging. Not real rough, but not recommended for splitters and air dams.

You and your car will get dirty. Here in the Georgia countryside there was prodigious dust, though that mostly just added to the fun.

There was a small but dedicated dirt crowd, with more entrants under 40 than over, a good sign for the SCC of A. As I stood at the registration tent, I felt strange and out of place. New. Virgin. Lost. Whaddu I do next? Where’s the course? What tires work? And on and on.

I trolled the paddock, ride antenna up, stumbling upon Christian Retterer, changing the tires to something made in Finland on a 1990 Eclipse Turbo AWD, co-driving with a spunky young woman named Deborah who had ridden in on a sport bike (bonus adventure points). They asked what I was driving, and I said I did not think my Volvo was a great idea, and Christian said, “Want to try this?” Randy said, “Do deer do it in the Georgia pines?”

I ran an Eclipse FWD for my ex, Linda, back in 1993, which she ran well at the Runoffs at Road Atlanta. I know the cars well, and could see Christian had done a lot of rally mods. But you can just drive up in your kid’s high school car. Frankly, some of the fastest times were a very stock-looking 1992 Sentra and a nearly unmodified Miata (National Champ Charlie Davos and son Matt). Seems soft, tall, long bump-rubber factory suspensions work pretty dang well in the mud and weeds.

The field included mostly Subarus of all types, from late model STi to early Impreza to roof-racked Outback wagon. There was a nice new Mini, and even a Cadillac SRX, which never looked so big until between the cones. Funny, but there was not one Corvette.

The course was tighter than before due to a new fence installed around the site. It looked a lot like an autocross, just on dirt and grass. As I walked (hiked?) the course, I couldn’t help busting out laughing – something that happened a lot that day. So, we’re really gonna blast around these cones. Sitting here in the field. Little chuckle – big laugh! Like that. Y’know?

Then we all got one slow parade lap, possibly to read the bumps and terrain. Passengers are legal. It seems to be encouraged, even. The feel was very grass-roots, like my early autocross days, and I liked it. I hung back and watched a couple runs.

Yeow! This is so hooligan! The first car tore off the line throwing motocross-style roost, leaping over the crossroad and blasting a great arc of red clay and grass shavings across the sky, yeeeeeaaahhh! Ha! There it came again – and again. What a show. The ground-bound contrails were glorious. Christian handed me a breath filter mask for our turn at course work, and now I see why. But I enjoyed the aerodynamic studies in the swirling dust clouds.

What a terrific sport. Imagine, folks, sliding is actually the fast way around, and not just for show. What a concept – I love it! But sliding too much still hurts the speed.

I rode with Christian, who made magic in the Eclipse. Beautiful all-wheel drifts the whole run. Made it look so easy. He spoke very highly of the Team O’Neil Rally School he’d just done, and his schooling showed. “It’s all weight management,” he said. Speaking my language, I thought, pleased.

Then I hopped in; all arms and elbows and feet flailing, and laughing out loud, again. Huge understeer, full-lock plow, then huger oversteer, barely hanging on. Think ahead? How, when I’m about to cream this set of cones? Even with the Scandinavian gnarly rally tires, there ain’t much grip. This sport takes finesse, and this rookie didn’t have it. Yet. The instant I’d get up some speed, I’d be in big trouble at the next maneuver; and I loved it.

The course work chasing pylons turned out to be very entertaining. I ran my phone battery down shooting action pics. Is that bad? There’s a lot of action, folks. And a lot of filthy, airborne silt, but it lent a lighthearted, youthful, what-the-hell-it’s-a-party air. And did I mention, the majority of the entrants were youngsters under 30?

Get this: every run counted. Cumulative. I really liked that. It made an endurance event of it. Any pylon penalty would haunt you to the very end. I guess they have to, because the wear changes the course constantly. I proudly kept my nose clean, but Christian still kicked my tail. On a fun run in the Davis Miata, I was astounded at how quickly it would turn on dirt. Miata: the universal answer.

Smooth is still fast here, and believe it or not, you’ve got to think even farther ahead. I didn’t. But it felt good to be a rookie in a new experience. People, you’ve got to try RallyCross!

Words and Image by Randy Pobst