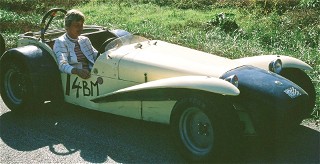 Patricia "Pat" Kelly, of Pleasanton, California, a member of the SCCA since 1973, passed away earlier in October.  She was 83 years old.

Kelly and her husband, John, were instrumental in the formation and guidance of the San Francisco Region Solo program in the 1970s, a program that spawned many National Champions and is arguably one of the most successful and largest in the country.  The Kellys also managed the autocross publication, North American Pylon, and wider ranging racing paper, MotoRacing, as well as the San Francisco Region’s newsletter, The Wheel.

A four-time Solo National Champion (1975, ‘77, ‘81 and ’82), Patricia was actually an SCCA member before her husband, who also passed away earlier this year.  The duo was awarded the Solo Cup in 1991 for having made outstanding contributions to the Solo Events Program, and the Kelly Cup is named in their honor, which is presented to the SCCA member who has shown extraordinary dedication and contribution to a Regional Solo Events Program.

Photo: Pat Kelly in her B Modified Lotus