SportsCar Feature: On The Move 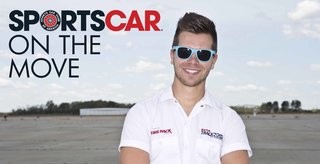 This article first appeared in the July, 2016 edition of SportsCar Magazine. SCCA members can read the current and past editions of SportCar digitally here after logging into their account; To become an SCCA member and get SportsCar mailed to your home address monthly in addition to the digital editions, click here.

Will this be Tom O’Gorman’s breakthrough year? While O’Gorman is quick to admit he doesn’t know what the future holds, he’s putting all the pieces in place to succeed as an SCCA Solo champion turned professional racer. And, in O’Gorman’s eyes, the pieces are fairly simple: be fast, win, move on to something else, and repeat. But even he admits it’s more difficult than that.

Truth be known, this enthusiastic 24-year-old seems to have as good a chance of making it as a professional racer as anyone, down to his humble roots and branded persona. His T-shirts and stickers read “Tomo Racing,” the self-designed logo involving a catchy illustration of the spiky-haired O’Gorman wearing his trademark sunglasses.

“I try to learn from racers who are having a lot of success now,” O’Gorman reveals, citing success stories like that of Pirelli World Challenge racer Ryan Eversley. “The big thing I see now is there are fewer opportunities for drivers being plucked by manufacturers, and the people who are having that success are branding themselves.”

Image is, indeed, vital in this game. “I’m lighthearted and energetic. I’m just putting it out there for everyone to see,” he says. It’s around this time he breaks out his phone and snaps a selfie with his new racecar and co-car owner David Daughtery, uploading the image to Instagram. The accompanying text: “This will make a lot more sense later #sccaselfie #funwithcars #teammates #photoshoot #honda #fit #carbonarmy.”

O’Gorman’s plan is to break into the big time of professional racing using World Challenge Touring Car B-Spec as the launching platform. But it’s not like this is his first foray into motorsports. That story began long ago for this young racer – back in 2007.

At the age of 15, O’Gorman discovered autocross. “I got my novice driver’s license, and two weeks later I was autocrossing,” he explains. “My dad and I had never done anything other than spectating before this.” Some of the races they attended included the Runoffs at Mid-Ohio Sports Car Course.

“We were quickly introduced to SCCA autocross through my cousin and, in 2007, I did my first National autocross,” he continues. “The next year, a group of people I’d met through my cousin had a spare Miata, and they asked if I wanted to autocross it the following year. In 2008, we drove up to the Peru [Tire Rack] Solo Championship Tour and I ended up winning – I was completely hooked.”

2009 saw O’Gorman purchasing his own autocross car, but frustration quickly set in. “I didn’t have the funding or knowledge to set the car up, and I hated coming off an event feeling like I drove really well but didn’t have the car to get the times I needed. So I sold that car and started co-driving at Solo events.”

Then came the year that changed his life. “In 2013, I won a Solo National Championship, my ProSolo class, the Triad Award, and was presented with the Driver of the Year Award,” he says. “After that, I decided I wanted to go to the next step, so I started looking at road racing.”

He purchased Jinx Jordan’s ITC Honda and raced Regionally, but it wasn’t long before his sights fixed on going pro. “I had the mindset that I needed to move fast, so after one year with the ITC car, I started looking at the next step,” he explains. “I ended up choosing B-Spec over Spec Miata or SRF because the costs were right, and I could double dip between Club and Pro Racing.”

This is where branding and social media came into effect. To launch this jump, the cash-strapped O’Gorman launched a crowd-funding campaign that netted enough money to contend a Honda Fit B-Spec in World Challenge, albeit for only a race or two.

“I raised about $8,000 after I bought the car,” he says. “After the Mid-Ohio race in 2015, I had some money left over, so I decided I was going to make it to [Mazda Raceway] Laguna Seca for the season finale.”

The problem was, his Fit received extensive damage at the Mid-Ohio World Challenge race – damage that included a bent rear axle. “I fixed the car myself, loaded the car up, and towed it to California [from Cincinnati] on my own.” Not bad for someone who admits to knowing more about styling his hair than working on cars. But, he laughs, “It never seemed like a bad idea to go to a World Challenge race on my own.”

In Monterey, he met up with familiar faces from Black Armor Helmets, who he knew through Solo competition, and they helped him through the weekend. This ultimately led to one of the sponsorships he now carries.

But let’s back step. When O’Gorman was testing the B-Spec waters, he met ex-pro racer, eight-time Runoffs Champ, and Instagram-less David Daughtery, who was campaigning B-Spec in the U.S. Majors Tour. “We stayed in contact throughout the season, then when we were both looking for a new Honda Fit for 2016, me for World Challenge and David for the Runoffs, it made sense to work together,” O’Gorman explains. The result was a relatively unlikely duo equipping one B-Spec car and sharing it.

The relationship benefits both drivers, but possibly O’Gorman slightly more. “I’ve always been the co-driver, even in autocross,” O’Gorman admits. “David will help me take care of the car, something I’ve never had to do before.”

Daughtery, on the flip side, is somewhat of a setup wiz. “There are a lot of things you can do that make no difference to the car, but there are things you need to do to make the car right, and that’s what I want to pass on to Tom,” Daughtery says, and explains that part of their agreement is that he will have the car ready to go for O’Gorman, minimizing O’Gorman’s stress once he’s at a pro race weekend. “When it comes to the World Challenge races, the car will be setup and ready,” Daughtery explains.

Daughtery also sees potential seeping from O’Gorman. “I’ve had Michael Galati and Randy Pobst as teammates in the past, and I don’t see any difference between them and Tom,” he exclaims. “I can see so much talent in Tom.”

Since O’Gorman’s plan is to win, move on, then repeat, that begs the question: What happens once the 2016 SCCA Pro Racing season ends? “I love the potential of the progression through the World Challenge, so I’d like to do that – but if options present themselves elsewhere, I’ll go there.” But flexibility, O’Gorman explains, is also paramount to his future success. “In racing, if you can’t fund yourself out of your own bank account, then you have to find other ways to pay for everything,” he says.

Outside of racing, O’Gorman’s working life also revolves around motorsports. He used to work for his father at the family-owned go-kart track, but now splits time between his job at Petty Holdings (which hosts the Richard Petty Driving Experience, among other things) and his duties with the SCCA National Office.

“I’ve really been lucky that through my growth at SCCA events, I’ve ended up working with the Tire Rack Starting Line schools and Track Night in America Driven by Tire Rack,” he says. It’s the latter partnership that brings this story full circle. “I wanted to make the B-Spec car a Track Night in America car in World Challenge,” he explains, pointing to the red Honda Fit sitting next to us, outfitted smartly with maps of all the racetracks Track Night hits, along with the Track Night in America logo. O’Gorman has been with Track Night since day one, is primarily responsible for the novice program, and is passionate about the program that allows easy, affordable racetrack access for the everyday enthusiast.

“The Track Night theme on the racecar lets spectators at World Challenge events know that there’s a place they can go to drive on track, and it also shows people who do Track Night in America events that the sky’s the limit,” he says.

Ultimately, regardless of whether he wins or loses in World Challenge this year, his racing future will be shaped by the way he deals with the results. But that probably won’t be a problem. You see, while O’Gorman claims his strategy is to win and then move on, the reality is he never truly leaves anything behind. That said, with the interview coming to a close, we parted ways, him heading to compete at the Wilmington ProSolo the following day. He may have professional racing on his mind, but at the end of the day, he smiles, “When I go to a ProSolo, I’m in my element and I’m enjoying being with all my friends. Going back to autocross is like vacation.” In many ways, this is undeniably O’Gorman’s year.

Words and Photo by Philip Royle