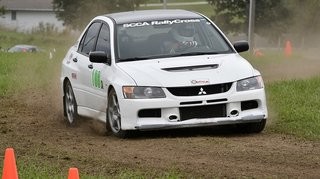 The final event of the 2016 SCCA RallyCross season, this was the second straight year the championship was conducted at the venue just south of Des Moines. One by one, more than 100 fierce warriors were on hand to fight it out across nine competition classes that navigated their way through a ribbon of rich, brown dirt hemmed in by lush green grass and glowing orange traffic cones.

Racers began their trek to a title under cloudy, gray skies Saturday with moisture hanging in the air.  Over the course of the day, drivers would have a go at two different courses, with four runs on each layout timed to 1/1000th of a second and missed “gates” resulting in a 10-second penalty.  Then under mostly cloudy skies Sunday, all competitors got four runs on one final circuit to decide who would emerge victorious.

In the 11-driver Stock Front-Wheel Drive class, Donald Carl in his Plymouth Neon Coup held a slight .017-second lead on Chang Kim’s Acura Integra R after Saturday, with Karter Bollmann third in a Ford Fiesta.  But the top two swapped Sunday and Kim claimed victory with a 1.267-second win over Carl.  Bollmann stayed put in third.

“This is only my second championship. The last one was in 2013 and my old championship jacket was getting pretty old,” Kim said with a chuckle and grin.

The Stock Rear-Wheel Drive class saw Patryk Matecki jump out to an early lead Saturday by establishing a 6.459-second gap on Joseph Hanna in second and Howard Duncan in third, all driving Mazda Miatas.  All three held their station Sunday as Matecki finished with a 6.370-second win over the other two drivers.

“This was a good weekend.  It was fun-packed,” Matecki said about winning his third national championship.  “Didn’t really have many issues with the car at all.  I’ve been doing this on the national level since 2009, so I have a little bit of experience.”

Jan Gerber, in a Mitsubishi Lancer, drove to a 3.786-second lead on Jon Trudeau’s Subaru Impreza WRX on Saturday in Stock All-Wheel Drive, with Zbigniew Lorenc sitting third also in a Subaru Impreza WRX.  None of that changed Sunday as all three maintained their finishing spots from the previous day.  With this 6.888-second win, Gerber has earned his fourth RallyCross National Championship.

“I knew we had a quick car,” Gerber said. “I just tried to drive quick and clean. Staying off the cones was important for me in this event.”

The Honda Civic Si of Robert Seelig held the lead Saturday in Prepared Front-Wheel Drive with a 4.584-second jump on Randy Patten and David Capesius, a pair of co-drivers both piloting a Dodge Neon SRT4 for the weekend.  That lead almost evaporated Sunday, but Seelig held on for a .307-second victory and his first RallyCross National Championship. Capesius finished second and Patten third.

“This feels much better than coming in second,” Seelig joked about his win.  “This year, things were tight right up to the very, very last run.  It was a lot of fun.”

Another tight battle was formed Saturday in Prepared Rear-Wheel Drive where Dan Hipwood in a Toyota MR2 had a scant .687-second lead on Eric Adams in second, driving a Scion FR-S, and Shawn Roberts’ Mazda Miata sitting third.  Hipwood wasn’t able to hold on and Adams’ performance Sunday netted him a .721-second win and the national RallyCross championship.  Hipwood brought it home in second with Roberts maintaining third.

“There was a lot of close competition.  Nothing was decided until the very last run,” Adams said.  “This is my first national championship out of six tries.  I’ve been second twice, so this is great.”

The 14-racer Prepared All-Wheel Drive class was controlled Saturday by Harold Denham’s Mitsubishi Lancer with 3.233 seconds over the Subaru Impreza WRX of Mark Macoubrie, and Janis Dancis’ Subaru Impreza 2.5 in third.  Sunday came and Dancis laid down the needed times to earn his first national championship in his first year of RallyCross with a 2.155-second margin of victory on Denham. Macoubrie finished third.

“I’m still not the fastest guy back home in Latvia,” said Dancis who also received the True Grit award for overcoming a blown engine just a week before the national championships.  “But here, I drive pretty quick.”

Only one second separated leader Leon Drake, in a Volkswagen Rabbit, from the Honda CRX of Bret Hunter Saturday in the Modified Front-Wheel Drive battle, with Aaron Miller sitting third in a Honda Civic.  But Drake left nothing to chance Sunday and built a 10.593-second gap to runner-up Miller for his second national championship, with Andrew Thomas claiming third in a Toyota Celica GT.

“I have to give a lot to this car,” Drake said.  “This is a Rabbit-Golf combo with some Miata parts in the rear-end.  It’s a bit of a Frankenstein because it’s put together out of everything.”

An extremely close race came to be Saturday in the 13-competitor Modified Rear-Wheel Drive class as John W. England, in a Mazda MX-5 Miata, clawed out a .223-second gap on Dustin Kirk and his Toyota Corolla GTS, with Bee Thao sitting another six seconds back in third.  Sunday saw the battle get tighter with the winning margin being only .103 second and going to England, with Kirk second and Thao third.

“The weekend started a little rough,” England admitted.  “But I climbed my way back up to the top.  Both days I had bad first runs, but then was able to stay clean and just take time off my runs.”

The giant Modified All-Wheel Drive class, with 21 combatants, was led Saturday by Bryan Rodgers’ Mitsubishi Lancer with 2.589 seconds on Todd Briley and his Subaru Impreza, and Maxwell Lawson third in a Mitsubishi Lancer.  Lawson was able to move up Sunday, but the best he could do was second as Rodgers extended his winning gap to 3.779 seconds for his first national championship win.

“Saturday morning was right how I wanted it to be,” Rodgers said.  “Then Saturday afternoon, the course wasn’t really my cup of tea.  But, luckily, Sunday morning the course was kind of the thing I like and it worked out great.”