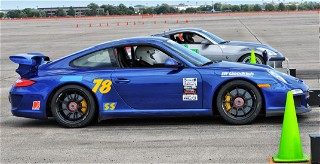 TOPEKA, Kan. (August 29, 2016) – The 2016 Tire Rack ProSolo Finale is coming up September 2-4 at Lincoln Airpark in Lincoln, Nebraska, and the race is on to see who will claim the overall ProSolo Super Challenge Points and ProSolo Ladies Challenge Points championships.  With 80 points up for grabs at the final event, nobody has a lock on the top spot.

In the ProSolo Super Challenge Points, David Marcus leads having accumulated 82 points to date in his Street Touring Xtreme Subaru BRZ.  Eric Hyman sits in second with 77 points garnered in a Street Modified Nissan GT-R.  The third position is currently claimed by Ben Wagstaff in a Street Touring Sport Mazda Miata with 71 points, and only one point behind sitting in fourth is the Street Touring FWD Acura RSX Type-S of David Whitener.

Others to keep an eye on include reigning points champion Mark Daddio, Paul Russell down in 13th from the Kart Modified Class who has claimed a top-three finish the last couple years, and Kim Whitener, David’s co-driver and wife, sitting in 14th going into the Finale.

It’s important to note Kim Whitener’s involvement in the ProSolo Super Challenge Points chase as she is the reigning ProSolo Ladies Challenge Points Champion.  However, she has decided not to compete in that championship this year, leaving the door open for a new competitor to ascend to the throne.

Two competitors to watch, who are currently outside the top five in points, are Shelly Monfort and Tamra Hunt.  Monfort in a Ladies 1 BMW 330Ci Coupe currently holds the sixth spot in the points chase, but she is always a threat.  And Hunt in her Ladies 1 Mazda Miata was last year’s Rookie of the Year.

During Tire Rack SCCA ProSolo events, drivers face off, side-by-side, at a “Christmas Tree” start before launching down a straightaway and into mirror image autocross courses. Three heats of Class competition give drivers 12 total runs, six on each course.  Like other Solo competitions, runs are timed to 1/1000th of a second and knocking a cone down means a two-second penalty added to a time.

Opening runs determine Class rankings and also set the qualifying order for the second part of the event which determines the overall winner. The top qualifiers enter into single-elimination brackets and conduct runoffs until only one driver remains: The Top Eliminator. Additionally, the Ladies Challenge pits top female qualifiers against one another, while the Super Challenge features the top 28 Open Class competitors in a winner-take-all battle. There is even a Bonus Challenge where randomly selected, non-qualifying drivers can compete for prizes and bragging rights.