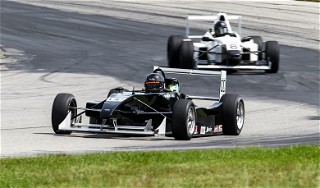 John Buttermore’s run to the Group One win was more straight-forward than on Saturday, where he had to run through the entire field in his Chevrolet Corvette after sitting out qualifying. Buttermore, of South Lyon, Michigan, got the jump on polesitter Rob Huffmaster, of Clarkston, Michigan, at the start and never looked back, taking a 31.5-second overall and Touring 2 class win.

In Touring 4, James Ebben, of Appleton, Wisconsin, was caught up in an incident on Saturday, damaging the right-front of his Lamers Racing Mazda MX-5 before ultimately finishing third. On Sunday, Ebben ran to a convincing 15-second victory. Garret Dunn, of Commerce Township, Michigan, scored his second win of the weekend, taking Super Touring Lite in his King Motorsports Honda CRX Si.

Defending Formula 500 National Champion Calvin Stewart, of Novi, Michigan, started 12th on the grid of Group Two after only turning a single qualifying lap and being brought in on a hook with a mechanical issue Sunday morning. Those issues were resolved by race time, and Stewart had a rocket start that propelled his Novakar/SabbathTruth.com Novakar Blade F600 to the lead before the end of the first lap. From there, Stewart drove away to his third win of the season. Russell Ruedisueli, of Rochester, Michigan, won the Formula F class for the second-straight day, finishing second overall in his Van Diemen Ford and setting the race’s fastest lap, a new FF record 1:19.646.

The Formula Vee battle was tight, as always, with Brandon and Andrew Abbott and Adam Jennerjahn swapping positions throughout the race. In the end, Brandon Abbott, of Farmington Hills, Michigan, took the win in his Hoosier Tire/Autowerks Vector AM-1/VW.

Unlike the battle royale for the lead of Group Three from Saturday, Michael Galati, of North Olmsted, Ohio, led all 24 laps in his John Schmitt-owned E Production Red Line/Hoosier Tire Honda S2000. For the first two-thirds of the race, Sam Halkias was within striking distance in his Triumph TR6 before spinning exiting Turn 5 and falling behind.

After lowering the F Production class track record to a 1:25.461, John Walker, of Richland, Michigan, limped his Walker Racing Lotus Super Seven to his second win of the weekend to go six-for-six on the season. Walker ran second to overall polesitter Peter Morton early, but moved to the lead before receiving some attrition assistance from both Morton and David Bednarz to provide a cushion for his ailing car that had dropped a cylinder. Michael Sturm finished second in his Sturminator Design/Hoosier Mazda Miata to clinch the Northern Conference Championship. Eric Vickerman, of Ypsilanti, Michigan, led flag-to-flag in H Production to win in his KIM/Ty/Kasey/Mom and Dad Austin-Healey Sprite.

If you look at the starting lineup and the finishing order of Group Four, it would appear to have been a Nicho Vardis runaway, but that hardly tells the story. Vardis, of Sylvan Lake, Michigan, started from the overall pole in his JDR F1000 car and got a clean jump on the Prototype 1 class car of second-starting Rob Shick. Vardis, however, spun in Turn Six, falling back to 17th place, allowing Shick to quickly gap the field. By lap five, Vardis had moved to fifth and then to fourth on lap six. Three laps later, he moved around the Formula Atlantic lead duo into second overall and then, on lap 17, he finally caught Shick, and moved to the lead. From there, he worked a gap that would ultimately reach 19 seconds over Formula Atlantic winner Spencer Brockman, of Westport, Connecticut. Vardis turned a fast time of 1:13.046 during his charge, breaking the Formula 1000 track record by more than half of a second.

Matt Machiko, of Wexford, Pennsylvania, needed to only go half distance in Formula Mazda to take the Northern Conference Championship, but he did that one better, going to the front at the start of the race and taking the win in his Frontier Dental Labs/CNC System entry.

Tyler Kicera, of Manheim, Pennsylvania, punctuated a season that included his second-consecutive Nationwide Points Championship and Northeast Conference Championship with a win in Spec Miata. Kicera had an early off and fell back fifth, but stayed in the lead pack as 16-year old Max Nufer, of Glencoe, Missouri, led the way for 16 laps. On lap 18, Kicera helped Justin Hille move to the lead on the front straight, but Hille went wide in Turn One, allowing Kicera through to the front. From there, he held the lead for the next five laps, fending off Nufer’s final charge to take the win.

After heartbreak in Saturday’s Group Six race, in which he led overall only to have a brake failure in the final moments of the race send him into the tire wall, Jonathan Start, of Caledonia, Michigan led flag-to-flag to win GT-2 and overall in his Kalin Construction Dodge Viper. Phil Lasco, of N. Venice, Florida, also led every lap to win GT-3 in his Lasco Ford Mazda RX-7. Brian Wallace, of Grand Blanc, Michigan, won American Sedan for the second-straight day in his Hoosier/Carbotech Chevrolet Camaro.

Scott Rettich, of Columbus, Ohio, went four-for-four at Grattan, sweeping the Formula Enterprises and Spec Racer Ford 3 races in his Alliance Autosport/PDI Communications entries. Rettich capped the weekend off with a blistering new SRF3 track record of 1:21.962, breaking the old mark by more than 1.5 seconds. Quinten Nelson, of Newark, Ohio, also swept the SRF class in his Alliance Autosport/Jae’s Towing and Recovery entry.

For a full listing of race results, please visit www.scca.com/grattanmajors.

Photo: Nicho Vardis on his way to a Formula 1000 win at Grattan