Majors Wins Not Gratis at Grattan 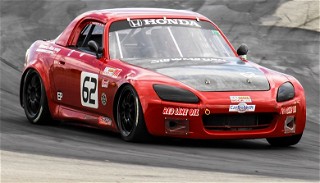 BELDING, Michigan (August 13, 2016) – Pop-up showers may have dampened the track, but it couldn’t cool down the racing at the penultimate day of 2016 SCCA U.S. Majors Tour competition at Grattan Raceway.

After morning showers wet down qualifying for most of the seven race groups, the afternoon was met with mostly clear skies save for a couple of pop-up showers. That allowed the 25-minute timed races around Grattan’s 2.0-mile, 10-turn circuit to provide great racing throughout the day as drivers battle for the final Championship positions in the Northern Conference and Nationwide Point Standings.

Race Group One’s grid was jumbled from what would normally be expected owing to the qualifying rain. Despite not going out for qualifying in his Chevrolet Corvette and starting 23rd overall (last) on the grid, John M. Buttermore made quick work of the field, getting to the overall lead by lap five, and setting a new Touring 2 track record in the process, with a 1:24.305 on lap four. Buttermore, of South Lyon, Michigan, cruised to the overall victory by more than 45 seconds over Super Touring Under winner Charles Tobel, of New Hudson, Michigan, who lowered his own class track record with a 1:26.528 in his Discount Tire/Novi Wall Co. Pontiac Solstice GXP.

The best battle of Group One was in Touring 4. After starting on the overall pole in his Advanced Autosports Mazda Miata, Voytek Burdzy, of Shiler Park, Illinois, saw Richard Dickey move to the front in his Mazda RX-8. A nose-to-tail battle between Dickey, Burdzy, Richard Mooney, James Ebben, Ryan Kowalewski and Jim Drago ensued for several laps. Drago was the first to find trouble, running off in Turn Three on lap six. One lap later, Kowalewski and Ebben’s Mazda MX-5s made contact in Turn Eight. In the end, Burdzy made his way back to the front, with Dickey and Mooney holding off a charging, albeit damaged, Ebben for what appeared to be the final spots on the podium. However, after the race, Burdzy was penalized three positions for a yellow flag violation, promoting Dickey, of Columbus, Indiana, to the win, and Mooney and Ebben to second and third, respectively.

Like Group One, Group Two featured a jumbled grid, with Formula Vees occupying each spot on the front two rows. As if not interesting enough, a brief, but heavy, rain shower preceded Group Two’s race. At the drop of the green, third row starters Brian Brothers (Formula 500) and Russell Ruedisueli (Formula F) moved around the Vees to lead into Turn One. While not racing one another in class, the pair traded the overall lead a couple times before Brothers, of Lake Orion, Michigan, took the lead for good with two laps remaining to take the win in his T&R Manufacturing TR1 Stinger. Ruedisueli, of Rochester, Michigan, won FF in his Van Diemen RF-99 Ford.

Behind them, Formula Vee gave spectators the best show, with Andrew Abbott taking the early lead from fourth on the grid. Polesitter Brandon Abbott and 10th starting Kerry Bowman hooked up to run Andrew Abbott down, with first Brandon Abbot taking the lead and then Bowman moving around both Abbotts to the lead. That lead was short-lived, though, as Bowman slid off course in Turn Three and back to third. That allowed the Abbotts to pull away, with Brandon Abbott, of Farmington Hills, Michigan, taking the win in his Hoosier/Autowerks Vector AM-1.

Group Three was without rain, but had plenty of drama. The race featured at least four different overall leaders, including the E Production cars of Michael Galati and Sam Halkias, and the F Production cars of John Walker and Peter Morton. Galati, of North Olmsted, Ohio, managed to get his Honda S2000 to the checker first, but not without a race-long battle from Morton.

Walker and Morton had actually moved to the top two spots overall in their Lotus Super Sevens, but it was short-lived, as Walker spun back to fifth overall, some 10 seconds behind the leaders. As the race went on, Halkias pulled his Triumph TR6 off after taking the lead from 11th on the grid, giving the point back to Galati, with Morton in tow. In the closing laps, Walker, of Richland, Michigan, ran fast lap after fast lap to reel in the leaders, passing for the F Production lead, and second overall, on what would become the final lap.

In addition to the battle for a race win in Group Five for Spec Miata, this weekend has the Northern Conference Championship and the Nationwide Points title on the line. From the green flag, polesitter Justin Hille, of Ypsilanti, Michigan, got a clean jump and began to drive away, opening up a 3.5-second lead, which, in Spec Miata, is an eternity. The early race for second was a tussle, with Max Nufer, Jordan Smart, Michael Novak, Tyler Kicera, Voytek Burdzy and Jim Drago swapping positions and allowing Hille to gap the field. Kicera, Drago and Nufer each had to recover from off-course excursions and when the race hit the half-way point, Smart was firmly in second, but 3.3 seconds behind Hille. Smart, also of Ypsilanti, methodically turned fast lap after fast lap, resetting the track record numerous times to catch Hille with two laps to go. Smart had a run coming out of the final corner, but couldn’t make it around the outside of Hille in Turn One. That was his last good shot, and Hille took his third Conference win of the season in the Hilltrux/Roush Mazda Miata, closing in on Burdzy for the title. Kicera finished third and clinched the Nationwide Points Championship in the process.

Group Six for big bore cars featured bumper-to-bumper racing in all three represented classes, with a twist at the end. After starting from the pole in his Dodge Viper, Jonathan Start fell back to fifth, but quickly got back to the front around multi-time Champion David Finch. Start had more than a 30-second lead over Finch when, with just three minutes remaining, he went off in turn one after losing his brakes, ending up with the rear of the car on the tire wall. While it promoted Finch, of Ann Arbor, Michigan, to the GT-2 win in his Porsche 944, the overall win went to the GT-3 battle, which was a good one.

Chad Bacon got the early jump on polesitter, defending National Champion Joe Kristensen, to lead GT-3 in the early stages. Kristensen and Bacon traded the position several times before Kristensen got the spot for good in his Acura RSX. In the closing stages, Phil Lasco, who started last in his Mazda RX-7, was charging, nearly catching Kristensen by the checkered flag, and setting the overall fastest race lap on the 17th, and final, tour.

In American Sedan, Brian Wallace, of Grand Blanc, Michigan, got the jump on polesitter Edward Hosni to take the early lead. Hosni pestered Wallace for several laps before falling off the pace, allowing Wallace to cruise to the win in his Chevrolet Camaro.

In the final race of the afternoon, Scott Rettich, of Columbus, Ohio, made it two-for-two after winning in Formula Enterprises earlier in the day, taking the overall and Spec Racer Ford 3 lead on lap five and driving away for the win in his Alliance Auto Sport entry. Teammate Quentin Nelson, of Newark, Ohio, shook off early challenges from Max Koff and Mark Carter to win in Spec Racer Ford.

Photo: Michael Galati on his way to an E Production win at Grattan Raceway.