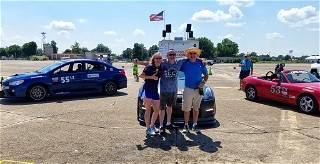 TOPEKA, Kan. (August 9, 2016) – Blistering heat and humidity welcomed competitors Saturday to the Tire Rack Blytheville ProSolo at Arkansas Aeroplex. Thankfully, that situation was not duplicated Sunday as class competition was wrapped up and challenges conducted.

The first run group featured exceptional driving in all three Ladies classes. The winner in Ladies 1 was decided on Laurie Hyman’s last run as she was the only driver in the group to break into the 40-second range for a turn on course. The class winners in Ladies 2 and Ladies 3, Jordan Towns and Laura Campbell, respectively, would ultimately meet later in the Ladies Challenge for a very exciting matchup.

Street Touring Roadster competition had Jed Peterson and Kerry Coughlin battling for the lead both days. In the end, Peterson took the Class win by only .523 second. David Marcus and Darrin DiSimo were also in close competition in Street Touring Xtreme with Marcus taking the top spot by a total of .633 second.

The third run group was highlighted by outstanding Street Class competition. In A Street, David Entz was able to defend his Saturday lead against co-driver Justin Batten and Thomas Lackey. Brian Johns advanced over Tom DeYoung to second place in B Street, but didn’t have enough to bump Vivek Goel from the top trophy position. And Daniel McCelvey improved his times in C Street for the win.

The final group of class competition was notable for its race tire clad cars. Eric Hyman took the win in Street Modified with his Nissan GT-R, and Troy Acosta surpassed his co-driver, Erik Strelnieks, in an F Prepared Porsche Boxster in the Race Tire 2 Class.

After a short break, it was time for Ladies, Bonus and Super Challenge competition. In the Ladies Challenge, it was a repeat from the Wilmington ProSolo one-week prior with Jordan Towns competing against Laura Campbell. Towns prevailed with her best run of the event, a 42.182 for the win. The Bonus Challenge proved that even a ProSolo newbie can win, with David Robinson taking the victory in his E Street Miata. The final Super Challenge runs showcased Eric Hyman slotted against Eric Strelnieks. Hyman stole the top honor with a blistering 39.024 run.

Full results can be found at the Tire Rack Blytheville ProSolo webpage.  Next on the SCCA ProSolo calendar is the September 2-4 Tire Rack ProSolo Finale at Lincoln Airpark in Lincoln, Nebraska.  For additional information on Tire Rack SCCA Solo, visit http://www.scca.com/solo.