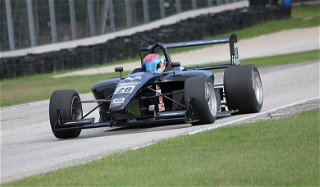 “Purrfect” Day 1 for Winners at SCCA Cat Majors in Wisconsin

Taking advantage of terrific conditions was Touring 2 racer Matt Slavens in his 997 Porsche.  In the opening race of the day, Slavens had an interesting battle early with a man accustomed to winning, Mark Boden in his M3 BMW.  Boden had the lead at the start, but Slavens was right in his shadow and able to attain the top spot by lap five.  Ultimately, he got the win.

“In the back portion of the track, my Porsche was a little faster.  The front section of the track, the BMW was much faster,” Slavens said.  “It made for a great battle out there.  Lots of fun.  Mark is an excellent driver, so it’s a big accomplishment just to pass him.”

Danny Weyls, driving a Van Diemen DP-08, experienced similar excitement on the way to his win in Formula Continental during the 25-minute race on the four-mile, 14-turn circuit.

“The racing was tight.  It was a battle royale the whole time,” Weyls noted while guzzling down water after the challenge.  “There was a lot of pressure at the beginning.  Then myself and the second-place finisher had a great fight for three-quarters of the race.  It was just awesome.  He was in my mirrors the whole time.  I couldn’t shake him, but it worked out good in the end.”

Things working out well in the end really summarizes the Spec Miata race Saturday for winner Adam Roberts.  He started third, but then had some troubles early on that forced him to fight back to the front.

“I got freight-trained and ended up back in fifth,” Roberts said.  “I knew I had a good car because I had no trouble keeping up with the lead pack.  Toward the end of the race, we all went down into Turn 5 and there was some trouble.  A few cars got taken out and that moved me a couple spots up to third.  Then I grabbed second before having a great battle on the last lap.  I had a great run coming out of Turn 14 and was able to get ahead before the checkered.”

Competition continues Sunday at the SCCA Cat Majors at Road America with 13-lap or 35-minute afternoon races. Follow all the action live at www.scca.com/live.

Below are provisional race results from Saturday’s SCCA Cat Majors at Road America with Class: Name, Hometown and Car.