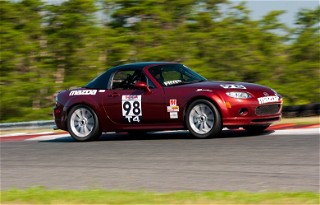 MILLVILLE, New Jersey (July 24, 2016) – While an old WWII warbird circled above the 2.25-mile circuit, racers Sunday squared off below during the second day of competition at the SCCA U.S. Majors Tour at New Jersey Motorsports Park hosted by the South Jersey Region in Millville, New Jersey.  Because the venue began existence in 1941 as an Army Air Field gunnery school for fighter pilots, it was a fitting location for SCCA aces to battle it out for victory.

In any fight, just because someone is down doesn’t mean they’re out.  Jonathan Corsico proved that exact point in Formula Enterprises on his way to a win.  Corsico had the lead in the first half of the event.  But then disaster struck.

“I had the pleasure of spinning out while leading in the middle of the race,” Corsico joked.  “Today’s race was hotter and longer.  But after I spun, I was very grateful the race today was so long because I had time to catch up to Justin Huffman, who drove a great race.  The lesson learned today was stay under control, be careful, run consistently good laps, and you’ll catch up.”

A war of attrition also developed Sunday. Thomas Burdge, driving a Mazda Miata, took the F Production lead early.  But by lap 10 in the 23-lap race, the F Production Mazda Miata of Charles Campbell gained the lead.  Then for the next several laps, Burdge and Campbell swapped the top spot in a great dogfight.  But after a few more loops around the course, Burdge pulled back with mechanical issues and Campbell went on to victory.

“A borrowed car, no cool suit, it was really hot.  This was a tough win,” Campbell said.  “He had a little more power than I did going down the front straight toward turn one, but I had more brakes than he did going into turn one.  It made turn one real interesting several times as we swapped spots, but we got it done.”

Making the most of opportunities is crucial in warfare.  In Touring 4, Kevin Fandozzi did just that while sitting second in his Chevrolet Camaro with Kevin Fryer and his Mazda MX-5 out front.  But that changed in the middle of the race thanks to cunning situational awareness.

“I was running about the same lap times as Fryer, but then three or four of the Touring 2 cars bottled him up in lapped traffic,” Fandozzi noted.  “Fryer saw me coming into turn one and he gave me room to race. But then we were two-wide, racing side-by-side all the way to the back end of the course.  But I missed a shift and he ended up staying in front to the end.  But it was a great race.”