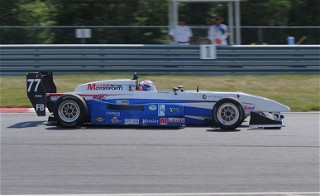 MILLVILLE, New Jersey (July 23, 2016) – Saturday’s SCCA U.S. Majors Tour at New Jersey Motorsports Park in Millville, New Jersey, was marked by two things: big racing and big heat.  But with this being the last weekend of competition in the Northeast Conference’s 12-round season, and championships on the line, many a competitor put discomfort aside and instead focused on the task at hand.

With temperatures just short of the century mark, and a humidity reading not too far behind, drivers headed out on the 2.25-mile circuit to do battle with one another, as well as the elements.  If one thing was evident throughout the day it was the fact that racers of all ages have a tremendous amount of stamina and determination.

Just such determination is what has brought Spec Racer Ford Gen3 driver Scott Rettich to the very brink of a Northeast Conference Championship.  Going into the weekend, Rettich had a four-point lead over fellow SRF3 racer Greg Obadia.  On Saturday, Rettich pulled off a win while Obadia finished second, pretty much locking down the top spot.  And in the same race, Spec Racer Ford pilot Jeffrey Lehner also pulled off a Class win.

“It was very, very hot, especially at the end of the race,” a sweaty Lehner said after climbing from his car. “The start didn’t go as planned since the SRF3s had an ‘issue’ in turn one.  That bunched us all together at the restart and made the rest of the race very exciting.”

Those watching the Spec Miata race Saturday must have thought the two drivers at the front of the field had gone crazy from the heat.  In the middle of that 25-minute race, Tyler Kicera and Elivan Goulart began switching the lead back and forth lap after lap.  Going into the last lap, Goulart had a slight edge.

“I was trying to keep Tyler behind me,” a smiling Goulart said.  “I was battling brake issues and he knew my weak spot.  We both drove a little defensive, but we were fair to each other and gave some clean room to race.”

Those were gracious words, considering Kicera got by Goulart for the win in the last half of the last lap.

“The race with Elivan was incredible.  Probably one of the most intense races I’ve had in a long time,” Kicera said.  “On the last lap I just put my head down and tried really, really hard to make up every little bit I could.  I had a great run on him coming out of turn five to take the lead, and from there was just able to hold him off.”

The Super Touring Under Class also saw lead swaps during that race.  David Brand, who ultimately won in his Lotus, was back in third at one point in the race when things started to change.

“I was in third, then got to second, but got passed and was back in third,” Brand recalled.  “Then I repassed for second and got by for first.  And all that happened toward the end of the race in the last couple laps.  I just hung with it and the race came to me as it went on.”

Round Twelve, the final round of the Northeast Conference 2016 racing season, occurs Sunday at the SCCA U.S. Majors Tour at New Jersey Motorsports Park with 23-lap or 40-min. morning and afternoon races. Follow all the action live at www.scca.com/live.