Back to Packwood for Tire Rack ProSolo 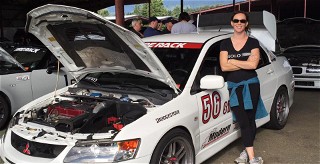 TOPEKA, Kan. (July 19, 2016) – For the second weekend in a row, Sports Car Club of America soloists were at the Hampton Mills Old Lumber Yard in Packwood, Washington, for some thrilling competition.  Two weekends ago it was the Tire Rack Packwood Championship Tour.  This past weekend it was the Tire Rack Packwood ProSolo that hosted nearly 140 drivers.

The Tim Weidemann-designed courses were transition heavy and rewarded drivers who were looking ahead. Rolling surface bumps also challenged the suspension of some cars. The times on course averaged around 25 seconds. The time difference between the two courses was about .8 second.

In Ladies Class 3, Tasha Mikko in a Mitsubishi Lancer Evo jumped out to an early lead Saturday in the 11-car field and held on to claim the win by .484 second over Annie Gill in a Scion FR-S.  Then in Ladies Class 2, Jessica Gauthier ended Saturday in third, but worked hard Sunday in her Subaru WRX to earn a .160-second victory over Kristi Brown’s Porsche Cayman.  And in Ladies Class 1, Caitlin Snell was in control all weekend in her Mitsubishi Lancer Evo and ended up atop the 9-car field by .837 second over Bonnie Mueller in a Ford Focus.

The F Street brawl saw Chevrolet vs. Ford with Ryan Otis taking the win in a Camaro by .199 second over the Mustang of James Paulson.  The B Street battle was controlled by Dan Bullis in his Corvette as he bested the rest by .563 second.

Street Touring Xtreme had stiff competition all weekend.  The 14-car field was led by the smallest of margins Saturday by Chris Thorpe in a Volkswagen Golf.  But when the dust settled Sunday, Pirelli World Challenge racer Bryan Heitkotter in a BMW 325is took the top position by only .072 second.  Then in Street Touring Roadster, Ron Bauer held the lead all weekend in a Mazda MX-5 Miata and ended with a winning margin of .042 second over the Honda S2000 of Kevin Dietz.

After winning Ladies Class 3, Tasha Mikko went on to win Sunday’s Ladies Challenge by beating Annie Gill, Laura Molleker and, finally, Lacey Otis.  The Bonus Challenge saw Joey Sim, who fought car troubles both days, beat out Brian Crow in the final after besting Carson Orud and Richard Willy.  And it was F Street winner Ryan Otis who went on to claim Super Challenge honors after getting the better of Glen Hernandez in the final.  Otis fought past Stacey Molleker, Dan Bullis and Kevin Dietz on his way to that final accomplishment.

Full results can be found at the Tire Rack Packwood ProSolo webpage.  Next on the SCCA ProSolo calendar is the July 29-31 Tire Rack Wilmington Summer ProSolo at Wilmington AirPark in Wilmington, Ohio.  For additional information on Tire Rack SCCA Solo, visit www.scca.com/solo.

Photo: Tasha Mikko took the win in L3 at the Packwood ProSolo