At a Glance: GingerMan Majors 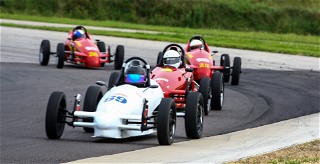 Back to the Track – It has been a couple weeks since the SCCA U.S. Majors Tour Northern Conference has been in action.  Back then it was at Road America and the WeatherTech® Chicago Region June Sprints®.  Many of the competitive drivers that raced at the Elkhart Lake, Wisconsin venue will again be in action this weekend at the SCCA U.S. Majors Tour at GingerMan Raceway.  This facility, located just inland from Lake Michigan near the resort town of South Haven, Michigan features a backstretch of more than 1,700 feet as part of an 11-turn, 2.14-mile layout.  This weekend’s action also marks the beginning of the second half of the 2016 competition calendar for the Northern Conference. Catch the action live this weekend at www.scca.com/live.

Person of Interest – The American Sedan entry list for the SCCA U.S. Majors Tour at GingerMan Raceway includes names such as Scott Sanda, Mark Muddiman, Andrew McDermid, Bryan Long, Drew Cattell, Craig Weidner and John Heinricy.  It was back in May during a snowy weekend at Pittsburgh International Race Complex when we last saw Heinricy racing AS at an SCCA U.S. Majors Tour event.  Since then he has been competing in B-Spec and taking a few wins along the way, and will be competing again in B-Spec at GingerMan.

Speaking of Back to the Track … -- Another name of note registered for the SCCA U.S. Majors Tour at GingerMan Raceway is that of Michael Galati. The seasoned racer, scheduled to compete in E Production at GingerMan, claimed podium positions in the Class recently at the SCCA U.S. Majors Tour at Watkins Glen.  Galati came up through Solo and ultimately moved to Club Racing, where he won five combined National Championships before graduating to World Challenge competition -- where he claimed five Championships.

No Better Way to Spend Summer Days – A resort region in beautiful Michigan, top-notch racers and racecars, and (hopefully) decent weather.  There’s no better way to spend a summer weekend, which is probably why so many volunteers have signed up to be part of the action at the SCCA U.S. Majors Tour at GingerMan Raceway.  No matter where the SCCA races in the United States, the dedicated member volunteers can be found organizing, registering, scoring, officiating and flagging during race weekends.  No event is possible without the help of these dedicated volunteers.

Live Timing and Notes:   Live Timing & Scoring, lap notes and more via the SCCA® Pit Board are available for all sessions through www.scca.com/live. Entry lists, full event schedules and more information available at www.sccamajors.com.

Photo: Northern Conference battle back on for SCCA U.S. Majors Tour at GingerMan