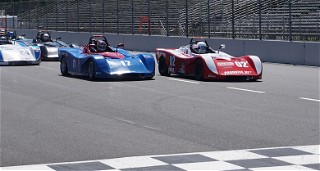 Portland, Oregon. (July 2, 2016) – Fourth of July weekend in Portland can bring any kind of weather. At the final weekend of the SCCA Western Conference Majors Tour, Friday’s practice and qualifying sessions took place under sunny skies with temperatures in the high 80s. Then Saturday morning’s second round of qualifying took place under mostly cloudy skies with cool breezes – perfect weather for fast times on Portland International Raceway’s long straights and sweeping curves.

Over 90 drivers came to Portland this weekend in search of both Conference championships and the final points necessary to qualify for the SCCA National Championship Runoffs, Presented by Garmin VIRB.  Portland International Raceway is a city-owned facility located within the City of Portland, and comprises 12 turns spread over the 1.97-mile course. Oregon Region of SCCA’s Western Conference is the event host.

“I got ahead and just drove a defensive line for the last couple of laps,” Black said.

For the second race of the day, the small-bore production cars of E Production, F Production, H Production, GT-Lite and Touring 3 made up a full field. Perennial contender Aaron Downey took EP honors in a Mazda RX-3, while Tom Tuttle claimed the FP win in a Huffaker MG Midget. The HP victory went to Jason Isley in a Toyota Yaris.

The final races of the SCCA Western Conference Majors Tour happen on Sunday with each of the seven groups racing one more time. Racing begins at 9:40 AM following a brief morning warm-up session for each group.

More information on SCCA Majors Tour events can be found at SCCA.com.

Photo: John Black leads the Spec Racer Ford field to the green flag to kick off the final rounds of the SCCA Western Conference Majors Tour

(For a web-resolution sized image, right click and "save as")