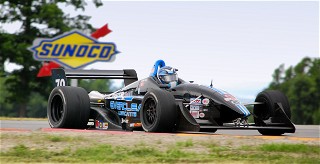 Watkins Glen, NY (June 26, 2016) – With the warmest weather of the three-day weekend beating down, drivers Sunday adjusted to more slippery surface conditions and coping with heat during day two of the SCCA U.S. Majors Tour at Watkins Glen International.

Group 7 racers bookended the day, due to a change in Saturday’s schedule, with consistency being the necessary game plan. Kevin Boehm dominated both Super Touring Lite races in his BFGoodrich/HPD/Carbotech Honda Civic Si. Mason Meredith and Kenneth Mason were also repeat Group 7 winners in Touring 3 and Touring 4, respectively.

Group 2 had busy races this weekend with six classes under contest, meaning drivers had to navigate speed and handling variations amongst the field. This makes moving through traffic a challenge. Sedat Yelkin dominated the Formula Atlantic contest with a 27-second margin of victory in his Everclear Toyota Swift 014 over second-place finisher Mike Jaques in his K-Hill Motorsports/Hoosier Toyota Swift 014. Yelkin lapped all but three competitors, highlighting his ability to cleanly navigate traffic.

Tyler Kicera proved that versatility was necessary for success at SCCA’s highest level of Club Racing during Sunday’s Spec Miata race. Warmer temperatures led to slicker track conditions and closer racing. After winning Saturday’s 20-minute race, Kicera started on pole Sunday in his Kessler Engineering/TAIT/Carbotech Mazda Miata. After a full-course caution at lap five, Kicera gave up the lead on lap 11 to Selin M. Rollan, who held the top spot in his Apex Alignment/BSI Racing/Rossini Racing Products Mazda Miata until the last lap. That is when Kicera made a timely pass, forcing Rollan back to third behind Elivan Goulart in his S.A.C Racing/Hoosier Mazda Miata. Kicera maintained the lead through the checkered flag to make a sweep of the weekend.

Then there was Scott Rudolph, a Formula 500 driver who came to Watkins Glen seventh in the Northeast Conference points after a sweep at Summit Point Raceway. He continued his winning ways with another sweep this weekend in the Rudolph Brother Racing Javelin, which he designed and built. When asked if he was headed to the Runoffs this fall, Scott commented it wasn’t in the plan. But he just might have to reconsider after two strong weekends in the SCCA U.S. Majors Tour.