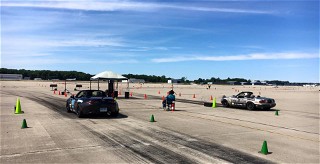 TOPEKA, Kan. (June 16, 2016) – The racing and weather were both hot this past weekend during the Tire Rack Toledo ProSolo at Toledo Express Airport in Toledo, Ohio. Being an airport, there was minimal shade to be had except under canopies scattered throughout the paddock. The racing surface started off dusty and loose, but soon rubbered in nicely on the clean, chosen line.

The weekend Super Street winner was Patrick Salerno who was .99-second faster in a Porsche 911 GT3 than runner-up Brian Conners. In an A Street Corvette battle, Mark Daddio won by over a second, with Jeff Cashmore in second and Mark Sarcevicz third. Chris Harvey claimed the C Street win in a Mazda MX-5, and Adam Norton did the same in E Street behind the wheel of a Toyota MR2 Spyder.

The F Street win went to Rod McGeorge in a Camaro SS, who edged out another Camaro SS driver, Courtney Cormier, by .268 second. The victory in G Street was claimed by Ford Focus ST pilot Michael Lane.  And Brian Hagaman squeaked out an H Street win by .009-second over Sam Karp, both driving a Ford Fiesta ST over the weekend.

More than 20 drivers made up the Street Touring Roadster Class at the Tire Rack Toledo ProSolo, but Geoff Walker got the better of them all in a Mazda MX-5 Miata. Street Touring Xtreme had a good-sized field, too, with David Marcus in a Scion FR-S atop that Class for the weekend.  And the Super Street R triumph was claimed by Grant Reeve in a Corvette.

Female competitors were also in fine form this weekend. Tamra Hunt’s Miata grabbed the Ladies Class 1 victory by 1.319-seconds over Shelly Monfort in a BMW. In Ladies Class 2, Jennifer Bedell at the helm of a Toyota MR2 Spyder had the skill for a win.  Then it was Ladies Class 3 driver Hillary Anderson Frank in a Honda CRX Si who grabbed the win by .122-second over Laura Campbell.  But by no means was that an end to Campbell’s efforts for this ProSolo.

On Sunday it was Tara Johns, Vicki Ryan and Tamra Hunt who all fell to Laura Campbell on her way to a final matchup against Lorien Feighner in the Ladies Challenge. When the dust cleared, Campbell had the victory.  Next it was Holly Schwedler who got the better of Andrew Pfotenha and Sam Tocci before beating Kathy Grunenwal to claim the Bonus Challenge win.  Then to wrap up the weekend’s competition, Brian Karwan started a march to conquest by besting Shawn Lambert, Larry MacLeod, Adam Norton and Ron Bistrais before meeting Benjamin Wagsta in the Super Challenge finale where Karwan walked away with the win.

Photo: The competition and temperatures where hot this weekend at the Tire Rack Toledo ProSolo