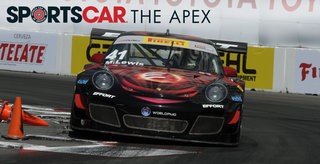 This article first appeared in the September, 2015 edition of SportsCar Magazine. SCCA members can read the current and past editions of SportCar digitally here after logging into their account; To become an SCCA member and get SportsCar mailed to your home address monthly in addition to the digital editions, click here.

There’s a T-shirt that says “Apex late.” Those who wear it understand the intimate relationship it has to speed. Do you? Do I, I ask myself? Here is my grass-roots definition: It’s where the corner stops getting tighter and starts getting wider. You have to wait for it. Many drivers do not wait long enough. This is a major factor separating the very quick from the nearly very quick.

Why is waiting so important? The wait is important because of the weight. This is my Holy Mystical Path of Driving. My Way of the Weight. Born of a youthful, accidental, discovery of physical truth (see the My Epiphany column years ago), and it can be yours, too.

Entering a turn, your car still needs to change direction, to turn more in the direction of the corner exit. Exiting the turn, you need to accelerate, and more speed means a wider line, turning less, beginning to straighten out. When you slow for a corner, more weight is transferred to the front tires, improving their grip, so your car turns best while you are still slowing down. When you go to the gas, accelerating the car, more weight is transferred to the rear, off the front tires, reducing its ability to turn. So, there it is. And right in the middle of the concept, is the apex (“Ahhhhhhhhh!” heavenly chorus of angels sings).

When the driver recognizes, looks, and waits for the apex (Ahhhhhh!), the driver will naturally be slowing down longer into a typical corner, thereby leaving the weight on the steering tires long enough to get the car to point at that apex (Ahhhhhh!). This is why when a corner is done properly, hitting that mid-corner marking point, once a driver goes to power, he will never back off. Properly done, the throttle will only be steady or increasing from that point on. Watch and listen to my Pike’s Peak in-car video on YouTube for a good example (he said humbly), right up until I go all Dukes of Hazzard (another reason he’s humbled), but that was another column. Data throttle traces should show the same thing. A smooth angle up, like a ramp, not a jagged alpine mountainside. If you ever have to lift off the gas, you apexed too early and are wasting precious time. Tick-tock-tick-tock. Remember to fix it next lap and forever after.

Think of the in-car videos you’ve seen and heard, or observed trackside, live and in person: baaaahhh – baah – baah – BAAAAAAAHHHHHH! You can beat that car. Early apex, had to lift twice.

A late apex (Ahhhhhh!) gets more of your turning done before going to power, which is perfectly effective because when you squeeze the accelerator leaving the turn, the car no longer turns as well. This later, straighter line also helps put power to the ground because the tire is cornering less and less and, of course, you cannot demand that your tire do a lot of two things at once. That’s called drifting – crowd pleasing and fun, but (sorry) slow.

The apex (Ahhhhhh!) has other benefits. Another way to define it is: It’s the place where you can begin to accelerate and not run off the road. Good to know when you’re cresting a hill and cannot see ahead, especially if you’re the instructor in the passenger seat. This is another good reason to consistently clip it, as the cognoscenti say. Keeping to the pavement is a good long-term racing strategy.

The more power you have, the later you must apex. This is an immutable law of physics. If your car accelerates faster, it straightens out faster, and the tires need to put more of their effort into forward traction. Back in 1995 was the first time I drove something with real power: the Ed Arnold/TC Kline Racing BMW M5 in the Bridgestone Supercar Championship. Its M-power 3.8L six made about 500hp in race tune. I hadn’t driven much over 250hp (RX-7 turbo and E30 M3 – classics now, ha). David Donohue had won the championship the year before, amazing considering the way it understeered, and was generous with his driving advice. The series ran on normal street tires, so grip was low. The cars were big for the time and had that terrific, wailing six – high power, low traction. “Drive it like a drag racer,” he said. “Apex very late, and drive it straight off the corner to capitalize on the acceleration.”

He was right, and I appreciated it when I got to Lime Rock Park. The downhill was always a hairy, hang-it-on-the-edge sweeper, fourth-gear fast, in the Hondas, Toyotas, and VWs I’d raced there. First time down that breathless drop in the M5 I had to brake (lots of power, low stick), turn in, and then gently roll that brawny power in, almost like one of the 90s down at Sebring. Totally different experience, and way easier than the flat-out early apex of a drifting, twitching, leaping CRX carrying max corner speed through there. It was a revelation. In the big Bimmer, it was more like a stop-and-go, slow-in-fast-out, classic Skip Barber chalkboard training turn. I was shocked, truthfully, to learn that a high-powered car was actually easier to drive in many corners than a low-powered one because of the enter-slower, apex (Ahhhhhh!) later, exit-straighter technique they reward. Make the track into a bunch of little drag races. Power transfers weight, which gives more control options than Spec Miata style foot-to-the-floor.

In a long, even-radius turn, more patience is required. Like Turn 3 at the Daytona Runoffs. The apex (Ahhhhhh!) is long. Come down to the inside and just hold it there, smoothly at the limit, and wait.

Early-apex kinks are my favorite. They open up, like Thunderhill’s Turn 1. Run, fly, be free! Finish braking early, no trail-brake here, or not dang much, and roll the throttle down early too. If you do not recognize the shape, you will over slow.

Annoyed by my heavenly chorus after the “apex” (Ahhhhh!)? Well, now you know how important it is. You’re welcome.