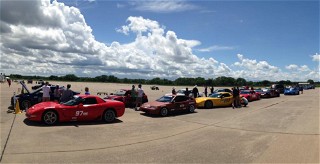 This weekend came with some questionable weather at the Tire Rack Lincoln Spring Nationals ProSolo. A cool Saturday morning saw an eventual light rain shower in early heats, then later gave way to a sunny afternoon. A technical course meant that drivers had to be on point with their apexes or it would penalize them for multiple corners afterwards. If you hit your apexes, you were rewarded with extended zones of acceleration.

As is often normal with Super Street R, the competition was tight most of the weekend. After the first day of competition, both Brian Peters and Sam Strano were sitting on the same tenth in the low 29s on each side with Matthew Braun less than 6/10ths back. Like often happens, time was found on Sunday morning. Braun was able to find 7/10ths to leap ahead of Strano who couldn't find time. It was, however, Peters who would find time on both sides, including being the only driver in SSR to drop into the 28s to take an almost 5/10ths win over the ultra-competitive group.

In Street Touring FWD, Kim Whitener and husband David in their “blurple” Acura RSX seemed to be running away, being the only two drivers consistently in the 31s on both courses. In the Sunday morning session, Adam Deffenbaugh managed to put down strong 31-second times and jump up within 3/10ths of Kim. But it was David who would take the overall win by a little over 1/10th.

C Street Prepared was all Neal Tovsen. Laying down a 28.691 on his first left-side run, he would be the only CSP driver to touch the 28s all weekend. Saturday morning, he would find a 28.2 to give himself a 1.2-second win over co-driver Todd Cochran while giving himself the third qualifier spot in the Super Challenge.

Race Tire 1 was a real treat with F-Mod hot shoe Darren Seltzer flying in to co-drive with Zak Kiesel. Seltzer would use his experience to pull out to an early lead over the group. Flirting with the top of the index all weekend, the two would go into Sunday ready for battle. Pushing, Jeff Kiesel, Zak’s father, would find cones on all four runs. Seltzer, however, would find 1/10th on the left, and a huge 7/10ths on the right to take home the win and the top PAX index spot for the ProSolo.

The Super Challenge was a cruel mistress to R-compound tires, making it hard to recreate hot-tire runs. Ron Williams in his Street Touring Sport CRX was able to knock off fellow street tire drivers Craig Wilcox and Kit Gauthier. Brian Peters would be his third-round conquest, and fourth would be James Yom. Williams would move on to the final pairing for the top spot.

Meanwhile, David Whitener faced Joe Tharpe in his Super Street Prepared Corvette early on in the first round, and was the lucky recipient of a second-round bye. In the third round, Whitener would face his wife who fell just short of what she needed to match David’s time. In the second-to-last round, Whitener bested Tom Reynolds. In the final round, Ron Williams would take a slight lead on the first pairing, but Whitener would find enough on his second run to take home the Super Challenge win.