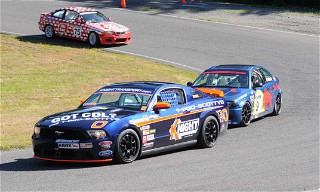 AUBURN, Wash. (May 30, 2016) – The sun came out and warmed Pacific Raceways for Round Ten of the SCCA U.S. Majors Tour Western Conference on Sunday. A clear blue sky and a light breeze kept cars and drivers fast and cool on the freshly rain-washed 2.5-mile track surface. It was a day entirely devoted to racing, with six contests of 22 laps or 35 minutes on the schedule.

Race group one was first out at 9:45 AM, and Scotty B. White worked hard to bring his No. 0 Got CDL? Knight Transport Ford Mustang home with the Touring 3 win ahead of Charles Hurley in the No. 9 Grip Racing BMW 330Ci.

“It was a hard race staying ahead of the BMWs, but my big old Ford Mustang got it done. It’s great to retire this car with a win,” White said.

The nine-car Formula Vee field made the show for race group two, But no one had anything for Dennis Andrade today, as the veteran pilot drove his No. 87 D & D Racing Vortech Formula Vee to a commanding lead over Brian McCarthy in the No. 05 BRM Engineering Anduril and Skip Streets in the No. 51 Hoosier/Ron Chuck Mysterian.  Mark Keller took Formula F honors in the No. 66 Blackjack Racing Piper, and Lance Spiering made it two-for-two this weekend in the No. 28 xbusgames.com KBS Formula 500.

In race group three, Scotty B. White maintained his juggernaut driving the No. 0 Got CDL? Ford Mustang to the win in Touring 4, while Oscar Jackson repeated his victory in Super Touring Under driving the No. 16 Jackson Racing BFGoodrich Scion FR-S. Steven Powers claimed Spec Miata honors in his No. 145 AmeriFirst Financial Mazda Miata, while Kyle Keenan swept the weekend in B-Spec driving the No. 44 Team KBR/Hoosier Kia Rio.

Race group four picked up the pace after lunch, with Formula Mazda driver Mel Kemper setting a new lap record in the No. 4 Goodyear Star Mazda on his way to the class win. Formula Continental saw a new winner, as Robert Armington took his No. 1 805/Tomasi Motorsports RF2000 to first place. In Formula B, Larry Vollum repeated his win in the No. 5 CV Medical Phoenix MV14.

Race group five saw a spectacular display of both raw power vs. technology as GT-1 winner Tim Adolphson in the No. 88 Zitovault/Proficio Chevrolet Monte Carlo and GT-2 winner Dylan Doherty in the No. 24 CPR Classic Sales Porsche 997 ran away from the field.  Collin Jackson delivered a smooth victory in GT-3 driving the No. 53 BM&M Screening Solutions Nissan 240SX. In Touring 2, it was Russ Peterson in the No. 7 Ford Mustang who broke Scotty B. White’s weekend-long winning streak. White finished second in the No. 0 Got CDL? Ford Mustang.

In race group six, the Spec Racers finished out the weekend with a clean race, and once again Patrick Byrne was the overall and Spec Racer Ford 3 winner in the No. 02 Explor/Pro Drive Racing SRF3. Bill Harris took SRF honors in the No. 04 Harris Motor Sports SRF.

The SCCA U.S. Majors Tour Western Conference next moves to Portland, Oregon for the final two rounds of racing on July 2-3, 2016 at Portland International Raceway.

Image: Scotty White took one of his many weekend wins in Touring 3.
Credit: Doug Berger/www.dbpics.com