Double the Racing, Double the Fun at Pueblo Day 1 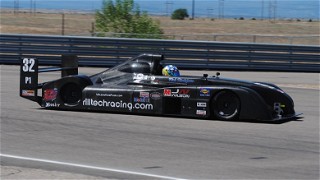 PUEBLO, Colorado (May 28, 2016) – On an absolutely beautiful day in Colorado, who wouldn’t want to go racing in the shadow of Pikes Peak? And racing is just what a number of drivers did Saturday during the opening day of SCCA U.S. Majors Tour competition at Pueblo Motorsports Park, with some drivers even opting to participate in two race groups during the day.

One such driver was Max Nufer, a young man who started his day with a win in Spec Miata, and then hopped right back out on track in the next race, in the same car with some slight modifications, to take a Touring 4 win.

“The Spec Miata race had a very, very clean start,” Nufer said after going back-to-back for Class wins. “And T4 was really fun, It was a big Class, big group of cars, and everyone had different amounts of power. But all drivers drove a great race.”

Robert Schader was another driver who took part in two races during the day, earning a win behind the wheel of his Lotus Exige in Super Touring Under, and another victory in Touring 3 with his 350Z Nissan.

“It was a great run today, nice and smooth,” Schader said. “I just have to thank the SCCA for giving me the opportunity to show off these great cars at this great race.”

Then there was Michael Pettiford, a racer who competed in both the Touring 1 Class and Touring 2 Class. While he finished second in Touring 2, the way his car performed en route to a Touring 1 win seemed akin to a magic carpet ride.

“Any time this car sees something in front of it, it just goes crazy,” Pettiford said with a grin while standing next to his yellow Corvette. “I can just take my hands off the wheel and the car just hunts down whatever is in front of it. It’s a weird thing.”