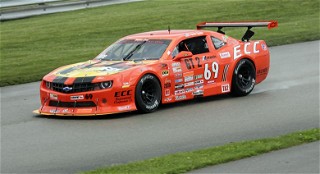 WAMPUM, Penn. (May 15, 2016) – Nobody can say that this weekend’s Round Five and Round Six of the Northeast Conference SCCA U.S. Majors Tour at Pittsburgh International Race Complex wasn’t interesting.

A few incidents Saturday that required tire wall maintenance meant the first Group 7 race of the weekend -- which encompassed Formula Continental, Formula Enterprises, Formula Mazda and Prototype 2 drivers -- was postponed until Sunday morning. Cloudy, cold conditions greeted those competitors, but they were able to complete their event before unseasonable weather rolled into the area.

The Spec Miata Class was next up on the schedule, and pole sitter Tyler Kicera again took an early lead. But soon he pulled into the pits and relinquished the top spot to Ralle Rookey. Then Rookey had a problem and gave up the lead to Nick Leverone who won the race as a combination of snow and sleet began falling on the track.

“I don’t think I’ve ever raced in the snow before,” Leverone said inside the warm tech garage while awaiting the podium presentations. “It was definitely treacherous out there.”

But what Leverone and the rest of the Spec Miata pack faced was nothing compared to what Group 2 pilots in GT-1, GT-2, GT-3, Touring 1 and A Sedan powerhouses had to face in the very next race. By the end of that second event, GT-2 winner Aaron Quine and the rest of his cohorts were dealing with an actual dusting of snow blowing across the circuit.

“This is a first,” Quine said as he climbed from his orange Chevrolet Camaro. “I’ve seen all kinds of conditions, but this may be the first time we’ve competed in the dry, rain, snow and sleet all in the same race.”

Toward the end of the Group 2 race, John Heinricy nosed his car into the Turn 17 tire barrier. He walked away from the incident, but the tire wall soon caught fire. Emergency crews responded to contain the situation, but damage to the safety barrier was deemed too extensive to repair in a timely manner. So officials decided to call a halt to racing for the day.

Round Five and Round Six of the Northeast Conference’s 12-round schedule are now complete. Next up for the Northeast Conference is a June 3-5 visit to the Mid-Ohio Sports Car Course in Lexington, Ohio – a weekend many are approaching as a forerunner to this year’s SCCA National Championship Runoffs Presented by Garmin VIRB to be held Septembers 19-25 at the same venue. More information about those events and the entire SCCA U.S. Majors Tour can be found at SCCA.com/majors.