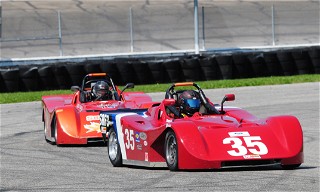 MADISON, Ill. (May 15, 2016) – The SCCA racers were not the heroes on Sunday during the Mid-States Conference Round Eight on the Circuit of St. Louis at Gateway Motorsports Park.

The hosting St. Louis Region, with the help of Formula Enterprises racer Tom Muffler, put on Military Appreciation Day during Sunday’s races. Pre-race ceremonies included the presentation of the colors by the 12th district of Missouri Veterans of Foreign Wars Honor Team, with Senior Airman Denver Murphy signing the National Anthem. Murphy is a vocalist with the Band of Mid-America, stationed at nearby Scott Airforce Base.

Unfortunately for Muffler, he was unable to dedicate a win to the servicemen involved in the opening ceremonies, or those who rode in the pace car as part of the Wounded Warriors project throughout the day. Muffler, while racing for the class lead on Saturday, crashed out of the race, and couldn’t continue on Sunday. David Proudfoot took the Formula Enterprises win in Muffler’s class.

On the track, the Super Touring Lite race was the top class fight for the day, with Cliff Ira coming out just ahead of Brian Laughlin. The rematch of the 2014 SCCA Runoffs presented by Garmin VIRB at Mazda Raceway Laguna Seca played out in much the same fashion, with the two working through the busiest group of the day.

Ira pulled a lead in the Fira Motorsports Acura Integra GSX, but the heavy traffic allowed Laughlin’s Tulsa Radiology Associates/Mazda/Hoosier/Jesse Prather Motorsports Mazda Miata to close back up. Following a lap 11 full course caution and a lap 16 restart, Laughlin took the lead onto the banking temporarily, only to see Ira reclaim the lead through the infield section.

Laughlin almost saw it all go away just a couple of laps later, getting crossed up by a lapped car and running into the grass. Laughlin collected it, and then once again reeled Ira in.

Jim Drago piloted his East Street Mazda Miata to his second win of the weekend after following Max Nufer’s Nufer Race Engineering Miata early in the race. A bobble by Nufer helped Drago move around to the lead, but soon had Tom Scheifler’s Miata right on his tail. Drago and Scheifler battled to the finish, with Drago crossing just 0.325-second in the lead. Drago later added to his win total with a Touring 4 victory.

The Mid-States Majors Tour continues at Pueblo Motorsports Park on May 28-29 with rounds nine and 10 of the Championship.

More information on the weekend and the U.S. Majors Tour, including results, can be found at SCCA.com.