Mid-States Crosses Halfway Point At The Gateway To The West 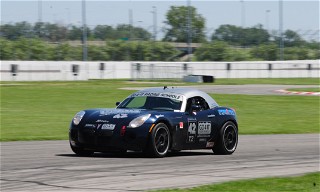 MADISON, Ill. (May 14, 2016) – Though cool at the start of the day, the weather played a big factor in Saturday’s SCCA Mid-States Majors Round Seven races on the Circuit of St. Louis at Gateway Motorsports Park.

Unlike most motorsports stories that mention the weather, this time, it was a positive.

Tom Patton, who was originally traveling to Pitt Race for the Northeast Conference Majors Tour event there before checking the weather report and heading west from his Cincinnati-area home, went flag-to-flag in the Hoosier Tires/Red Line Oil Sunbeam Tiger to win GT-2. Later in the day, B-Spec winner David Daughtery admitted to the same strategy later in the day from his Fortville, Ind., home. His decision also paid off, taking the win in the Hoosier Tire/HPD/Carbotech Brakes Honda Fit.

The overall leaders dictated the pace almost start to finish during the 25-minute timed races.

Continuing the pole-to-checkers showdown was Eric Prill in F Production. Sam Henry’s Sprinfield Dyno/SafeRacer Mazda Miata got the jump on the field and led the first lap, but Prill’s MaxtonsFight.org/Jesse Prather Motorsports/Hoosier Miata took the lead in turn one on the second lap, then pulled away for the overall win. Mark Weber, an SCCA veteran with more starts than anyone at the SCCA Runoffs presented by Garmin VIRB, earned his first career E Production win in Majors or National competition in the Mazda/Goodyear/Hawk/Jesse Prather Motorsports Miata.

Chris Jennerjahn’s Jennerjahn Machine Inc. Vortech/Volkswagen took advantage of an early incident that slowed Bill Johnson and Charles Hearn, and then beat son Adam Jennerjahn to the finish to take the Formula Vee win on Saturday. Despite spins, both Hearn and Johnson had closed to the back of the Jennerjahn’s intramural battle, but needed more time on track to catch back up and the father/son duo filled the top two spots on the podium.

Round Eight of the Mid-States Majors Tour continues on Sunday from Gateway Motorsports Park, with racing beginning at 11:55 a.m. Central time following an additional qualifying session for all six Majors run groups.

More information on the weekend and the U.S. Majors Tour, including results, can be found at SCCA.com.