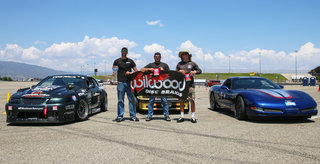 TOPEKA, Kan. (May 5, 2016) – A little rain Saturday morning gave way to wonderful weather Saturday afternoon and all of Sunday for the first CAM Challenge of 2016 held at Auto Club Speedway in Fontana, California. The weekend was made possible through support from presenting sponsors Wilwood Brakes, Speedway Motors, Detroit Speed and Ridetech.

More than 70 drivers came out to play at the California CAM Challenge this past weekend. Saturday’s Class competitions saw a great Ford vs. Chevy battle in CAM-C with Brett Madsen triumphant in a ‘99 ROUSH Mustang.  In CAM-S competition, a score of Corvettes -- C2s right up to C6s -- were led start to finish by Steve Abbott.  And in CAM-T, multi-time National Solo Champion Mary Pozzi took the win with Mike Trenkle in a Fox-bodied Mustang claiming second ahead of Jake Rozelle’s ’69 Camaro.  But Rozelle’s performance netted him an automatic invite to November’s Good Guys Finale in Scottsdale, Arizona.

Sunday’s Challenge format saw a shakeup in the CAM-T group with Trenkle taking the victory after Mike Erickson in a four-door Chevelle won his first two rounds before being eliminated in round three. Madsen won the tight CAM-C Challenge, living a charmed life as he hit cones in both the first and second round.  And in a repeat of Saturday’s performance, CAM-S was dominated start to finish by Abbott.

The CAM Challenge Finale was a close one as Madsen won out over Abbott by a margin of .063 second. Trenkle took third. But all winners from the weekend also earned a bid to the CAM Challenge Invitational taking place at the SCCA Solo Nationals in September.

Full results can be viewed at the California CAM Challenge event page. Honored over the weekend was Mike Young who received the “Spirit of CAM” award for his support of competitors and the CAM program in San Diego.  And Q.V. Dang won the Wilwood Brakes raffle.

The three CAM Challenge Classes (CAM-C, CAM-T, CAM-S) were developed to give traditional and contemporary American muscle car sedans and coupes -- with front-engine, rear-wheel-drive configurations -- and American sports cars from the 1960s and 1970s a place to compete in a controlled environment. Each car must be street legal, licensed and insured, have intact interiors and use a 200 treadwear street-legal tire.

Photo: It was a banner weekend for CAM Challenge competitors at Auto Club Speedway.