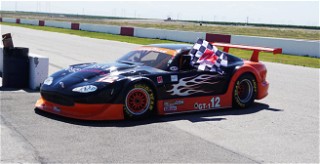 On Saturday, a total of 11 drivers lowered their Class lap records for the 2.92-mile configuration of the Buttonwillow course. On Sunday, another 14 lap records fell. In five cases, records set on Saturday were broken on Sunday.

Spec Miata led off the day, with Dakota Dickerson on pole in the No. 80 Rush Motorsports Mazda Miata. Outside polesitter Steven Powers took the lead at the start in the No. 145 Amerifirst Financial Mazda Miata.

“The plan was to get out front, and I did that. But Dickerson was just so quick. He got a good run on me and that was it,” Powers said. Dickerson never let go of the lead, and set a new SM lap record during the race, bettering his own record set on Saturday.

Jim Devenport claimed his second Prototype 1 victory of the weekend and a lap record in his No. 23 Cranbrook Group Norma M20FC. Timothy de Silva also claimed top honors and a new record in Formula Continental driving the No. 3 DFR/TLP Racing Van Diemen. Prototype 2 had a new winner in Dave Tweedlie, driving the No. 65 Team Tweedlie Radical SR3. In Formula 1000, John LaBrie took another win and a record in his No. 33 Phoenix Race Works F1000.

In Group 5, local expert Mike Miserendino moved to SRF3 and set a record Sunday, after winning SRF and setting a record for that class on Saturday. Miserendino led the SRF3 field from flag to flag in the No. 11 MBI Racing SRF3. In the second-generation SRF class, Jake Pipal won Sunday’s race in the No. 28 Dennis Pipal SRF.

In Race Group 6, Aaron Downey set a record and took top position in E Production driving the No. 51 Roundpeg.com Mazda RX-3. F Production again went to Brian Linn in the No. 21 Hoosier Tire MG Midget. H Production honors went to Jason Isley in the No. 99 Racer.com Toyota Yaris. Isley set a new record for that class.

Andrie Hartanto made it two for two in Super Touring Light driving his No. 99 Supertech Acura Integra, setting a new record for the class on Saturday and lowering it on Sunday. Tom Wickersham won the T4 class for the second time this weekend in his No. 01 Maine Straight Mazda Miata. Joe Huffaker claimed the GT-Lite win and a new record driving the No. 77 Huffaker Horsepower MG Midget. Calvin Tam took the record-setting win in B-Spec driving the No. 45 American Honda Fit.

As clouds moved in threatening rain, the final race of the weekend got a reprieve from the afternoon heat. Marc Hoover took another win in Touring 1 driving his No. 98 Hooverspeed Mazda Miata. In Touring 2, Christopher Qualls set a new record and claimed the win in the No. 73 HASA Chemicals Chevrolet Corvette. Dale Shoemaker claimed the Touring 3 win Sunday, driving the No. 152 Hytorc Mazda Miata.

The SCCA Western Conference Majors Tour now moves on to the Pacific Northwest, with a May 27-29 event at Pacific Raceways in Kent, Washington hosted by the Northwest Region SCCA. More information on each of the SCCA Majors Tour events can be found at SCCA.com.