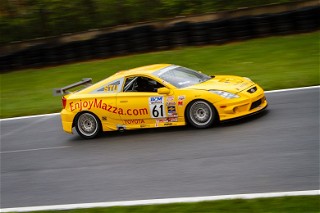 SUMMIT POINT, Virginia (May 1, 2016) – A little rain, a little wine and some sunshine made everything fine during the second day of racing at the SCCA U.S. Majors Tour Summit Point Motorsports Park event.

Today was Round Four of the Northeast Conference schedule, and the morning started with dark skies and heavy rain that left plenty of standing water on the track. Open-cockpit cars were the lucky ones to face the weather first. The result, a great Formula F battle between Jon Krolewicz and Doug Voss.

At the start, Voss had a solid lead, but Krolewicz set out and chased him down. As the rain continued to fall, Voss’ gap decreased to three seconds, then two seconds, then half a second. And then, Krolewicz got by for the lead and Voss dropped about 10 seconds behind.

Fighting back through traffic, Voss closed in on Krolewicz and retook the lead with fewer than 10 minutes remaining in the race, and held the top spot to the end.

“It was fun out there, but it was treacherous,” a jubilant Voss said upon taking his second Formula F win of the weekend. “I spun in the Carousel and Krolewicz came around me, and then I had to run him down. Some Formula Vees held him up and I was able to get back around for the lead.”

After the day’s first race, the precipitation subsided and the track appeared to be drying. But according to Robert Mazza, Sunday’s Super Touring Under winner in a Toyota Celica GTS, looks were deceiving.

“Things kept getting worse as the race went on,” said Mazza, who also happens to be behind Mazza Vineyards – the ‘Official Sparkling Wine’ of the SCCA U.S. Majors Tour and the SCCA Runoffs® Presented by Garmin VIRB. “People were going off the track and bringing a lot of mud back on. So, the grip actually got worse even though the weather was improving.”

The final race group of the day was bathed in sunshine, which was a fitting close to a fabulous weekend. In that event, a great clash developed in GT-2 between Andrew Aquilante and Preston Calvert, both driving Chevrolet Corvettes. For a good chunk of the race, Calvert held the lead. But with about 10 minutes remaining in the race, Aquilante made a clean move into Turn 1 for the lead. But Calvert didn’t let Aquilante get away and was able to retake the lead for the win.

“Andrew is an incredible driver with great car control,” Calvert said. “But I had a little more ‘car’ today than he was driving and we had an incredibly fun battle out there. The win is a great way to finish up the weekend at Summit Point.”

Now with Round Three and Round Four completed at Summit Point Motorsports Park, the Northeast Conference moves on to Round Five and Round Six with a May 14-15 visit to Pittsburgh International Race Complex in Wampum, Pennsylvania. More information about that event and the entire SCCA U.S. Majors Tour can be found at SCCA.com/majors.