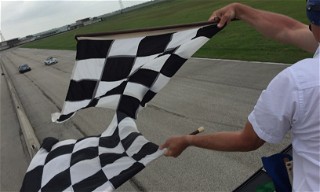 ANGELTON, Texas (May 1, 2016) – Round Six of the SCCA Mid-States Majors Tour ran Sunday, taking the series championship to its halfway point at MSR Houston.

The day started as a family affair, with back-to-back wins by the Entwistle family. Son John, who was cost a race on Saturday in his No. 8 Formula Mazda after contact, spun once in the rain but still stretched his lead to 24.785 seconds.

Father Andrew also spun in the rain in his Touring 1 No. 08 Ford Mustang, but kept going to secure a 40-second win in his class.

That made for a special May Day, as each earned their first win in SCCA Majors competition.

Spec Miata went on track just after the lunch break, and the wind and heat left the field on the Hoosier slicks instead of the rain dance that the morning classes saw. Chris Haldeman drove his No. 73 Mazda Miata from the pole to the win, getting in front of the field and staying in front of Matt Reynolds and Michael Ross for the final two podium positions. Reynolds moved into second with two laps to go to stand second in the No. 74 Reynolds Bros. Racing/Vintage Connection/JPM Miata.

Now completely dry for Formula F, Randy Acock didn’t let an early race spin in the No. 41 Acock Engineering/Scott Segers Race Prep Van Dieman RF98/Honda end his day. Acock chased down the No. 51 Piper DF51/Honda of Bruce Cerveny, making up the five-second deficit and closing to Cerveny’s gearbox with two laps to go.

Cerveny held off the pressure until a defensive move going into Turn Four  on the final lap chopped off the corner and spun. Without contact, Acock moved around the outside and took the win.

Matt Reynolds capped the day in his E Production No. 71 Reynolds Bros. Racing/Hoosier/JPM/Vintage Connection Mazda Miata by lapping nearly the entire Group Seven field on the way to checkered flag. Only Luis Rivera’s Super Touring Under No. 32 RPM Motorsports/Hoosier/B Wear Mazda RX-7 remained on the lead lap, with Reynolds within a couple of car lengths of him at the finish.

While the day was full of good racing, the most talked about moment came at lunch time with the track cold. A small airplane from the nearby airport that had been circulating landed on the backstraight, where a group of safety workers met the pilot. After a brief conversation, the plane took off again safely and didn’t disrupt the day’s schedule.