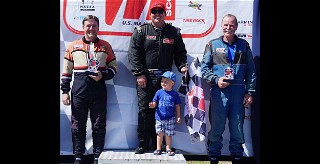 The first race was Spec Miata, where Dakota Dickerson qualified on pole. After outside polesitter Steven Powers grabbed a lead at the start, Dickerson slipped back by before the opening lap was half-done. Once he had clear track in front of him, Dickerson legged out a substantial lead of more than 8 seconds by the checkered flag.

In the second race of the day, GT-1 driver Michael Lewis claimed the overall and Class win, driving the No. 12 Goodyear Jaguar XKR ahead of the pack. Dylan Doherty had a bit of competition, but brought in the GT-2 Class win in his No. 24 CPR Classic Porsche 997 GT3 Cup car. Oscar Jackson Jr. earned Super Touring Under honors in a crowded field driving the No. 16 Jackson Racing Scion FR-S. Veteran GT-3 Class leader Wolfgang Maike took the top spot in his No. 15 Toyota/Red Line Oil Toyota Paseo, and Christopher Qualls made the American Sedan top spot driving the No. 73 Haas Chemicals Ford Mustang.

After an initial wave-off, Race Group 3 ran the fastest laps of the day on Buttonwillow’s long straights and sweeping turns. Jim Devenport grabbed the overall group lead in his No. 23 Cranbrook Group Norma M20FC, bringing home the Prototype 1 win. Chris Emanuel won Formula Atlantic in the No. 36 Airguard Swift 016a, while Timothy de Silva claimed top honors in Formula Continental in the No. 3 DFR/TLP Racing Van Diemen. The Prototype 2 class was won by Tony Abel driving the No. 22 Stohr WF1. In Formula 1000, John LaBrie took the win in his No. 33 Phoenix Race Works F1000.

Todd Harris won the SRF3 race in his No. 24 Pro Drive Racing /Flat Out Racing Spec Racer Ford. After the contest, he noted that “there was a shemozzle at the start, but we made it through and kept it on track.”

Multi-time Runoffs champion Mike Miserendino competed in the SRF Class Saturday behind the wheel of the No. 7 MBI Racing vehicle, winning the day and accumulating points towards a Runoffs invitation. Miserendino will race in SRF3 Sunday.

Super Touring Light victory came to Andrie Hartanto in the No. 99 Supertech Acura Integra. Tom Wickersham won the T4 class in his No. 01 Maine Straight Mazda Miata. Craig Carter also won in GT-Lite driving the No. 31 HRS Racing Nissan Sentra. Slower than the other winners, but fastest in his Class was Calvin Tam taking the win in B-Spec driving the No. 45 American Honda Fit.

The last race of the day finished well with Runoffs veteran Marc Hoover taking an easy Touring 1 and overall win in his No. 98 Hooverspeed Mazda Miata. Keeping up his winning ways, Tom Wickersham made it a double with a Touring 3 win in his No. 01 Maine Straight Ford Mustang. Guy Dreier also won in Touring 2 driving the No. 13 Guy Dreier Racing Ford Mustang GT.

Round Eight of the SCCA Western Conference Majors Tour continues on Sunday with races in each of the seven groups at Buttonwillow Raceway Park. Racing follows a morning warm-up session for each of the groups.