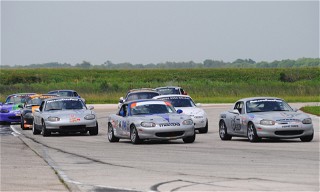 ANGELTON, Texas (April 30, 2016) – The four corners of the SCCA U.S. Majors Tour stretched to deep Texas in the Mid-States Conference on Saturday, where the rains in the Houston area finally cleared for the afternoon’s racing.

While morning was wet, the first race of the afternoon saw sunny, hot, and humid temperatures.

In that run, Karl Markey outlasted a rough and tumble Formula Mazda field to take the checkered flag in the class in the No. 80 Formula Mazda. The initial race was a lead battle by John Entwistle’s No. 8 Formula Mazda and the chasing Paul Ravaris’ No. 5 Madhatter Golf Formula Mazda. Contact between Entwistle and Ravaris sent Entwistle spinning and Ravaris off went a bent front wing and into the lead. Ravaris led for several laps, before Markey chased him down and Entwistle rallied. At the finish, Markey crossed in front of a charging Entwistle and then Ravaris.

That was followed by the overall winner in Group 2, John Vining, in the No. 15 Hoosier/Smiley Chevrolet Monte Carlo. Vining took the group lead at the start, and the 16-year-old rolled to the finish, just three days shy of his 17th birthday.

Proving everything really is bigger in Texas, at least for Saturday, 19 of the 21 race winners were from the Lonestar State.

Round Six of the Mid-States Majors Tour continues on Sunday with races in each of the seven groups at MSR Houston. Racing follows a morning qualifying session for each of the groups.