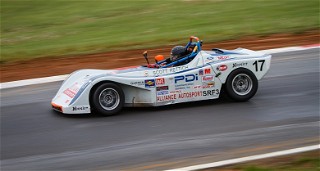 In the very first race of the day, three Formula V combatants went at it for almost the entire 25-minute race. Rick Shields, Roger Siebenaler and Gary Kittell fought amongst themselves to lead the pack early. Siebenaler and Shields spent most of the race swapping the top position every few laps. As they approached the checker flag, Shield pulled alongside Siebenaler, but was unable to get his nose in front, giving Siebenaler a hard-fought victory.

“Rick and I were going back and forth, back and forth the whole race,” Siebenaler said afterwards. “We caught up to a slower Formula F car, but we couldn’t get by him. The draft off the Formula F helped me a little bit and allowed me to beat Rick to the finish line by about 10 feet or so.”

The second race of the day included the Spec Racer Ford Gen3 Class which, as usual, did not disappoint when it came to on-track action. Cliff White, Scott Rettich and Tray Ayres, who recently claimed the Southeast Division U.S. Majors Tour Championship in SRF3, went to the front of the pack early. Just like in the day's previous race, the three drivers began switching the lead between each other. By the end, Rettich had secured the top spot, a feat which he duplicated again later in the day while competing in the Formula Enterprise Class.

“It was an awesome race between the group of us up front in SRF Gen3,” Rettich said with his first win of the day achieved. “I knew I had a very strong, very consistent car. So I was just kind of waiting for the right time to make a move. I made the key move, going from third to first, in Turn 1 and I didn’t look back the last two laps. It was excellent.”

Of course, exciting racing at SCCA U.S. Majors Tour events isn’t always contained to within a single Class. A breathless Gary Baucom made that point clear after his F Production win on Saturday in his Fiat 124 Spider.

“The first of my race was really terrifying,” an animated and grinning Baucom said. “One car’s engine blew up in front of me. That scared me to death. Then me and this other Miata hooked up and, well, he was fast! I had an edge on him on the back of the course, but couldn’t get by. Then something happened to him and I got lucky!”

Another day of SCCA U.S. Majors Tour competition at Summit Point Motorsports Park awaits Sunday with 25-lap or 35-min races beginning at 9:05am ET. More information can be found at SCCA.com/majors.