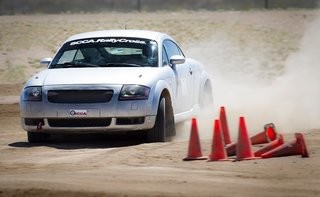 Hosted at the Desert Empire Fairgrounds in Ridgecrest, California, this weekend’s event was the first ever RallyCross National Challenge conducted in the revitalized format that aims to mimic the success of the RallyCross National Championship. On Fridays, open “Test & Tune” sessions are held followed by competition Saturdays and Sundays.  Each weekend has three unique course layouts, and drivers get at least three shots at each configuration.  Runs are timed to 1/1000th of a second with missed “gates” resulting in a 10-second penalty.  Class winners are based on the total time of all runs Saturday and Sunday.

This weekend in SoCal, high winds Friday and Saturday whipped up a lot of dust, thus adding to the challenge for drivers. Competitors each got four runs on the three courses. The first course included a “keyhole” that gave drivers three options for going through the feature: clockwise, counterclockwise or a tight right-hand turn.  The second course of the weekend incorporated a lot of sweeping turns, a layout that proved fun for drivers willing to break loose the rear of their cars to rotate through the bends.  The third and final course featured slaloms that rewarded patience at the beginning of the course.

Also introduced at this weekend’s event was a new package where video of each new course layout was captured using a Garmin VIRB XE and made accessible to drivers for review prior to runs. Along with that, a course map was produced from the camera’s data and supplied to competitors.

Overall, this first event was a great success as indicated by broad smiles on participant faces. As the SCCA’s most widespread and readily accessible form of extreme motorsport, RallyCross is a scaled down version of a rally stage laid out on a non-paved plot of land where the course is delineated by traffic cones instead of trees or rocks. Participation requirements are considerably less than those associated with other forms of performance rally, so drivers usually only need a mechanically sound, hardtop vehicle and a helmet to come play in the dirt.

Next up on the RallyCross schedule is the July 8-10 2016 SCCA East Coast RallyCross National Challenge at Gravel Mountain in Frostburg, Maryland.

Image: Juraj Bodnar digs into a corner in his Audi TT during this weekend’s SCCA West Coast RallyCross National Challenge.