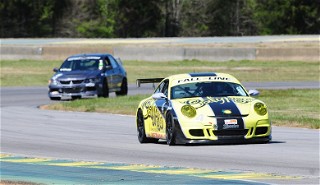 ALTON, Virginia (April 17, 2016) – During the second day of SCCA U.S. Majors Tour competition at VIRginia International Raceway, several drivers were given a second chance to achieve victory, and many seized the opportunity.

Alex Mayer, a Formula 1000 driver, was having one rotten weekend in Alton, Virginia. After a good qualifying run Friday, his second qualifying session Saturday ended in a wall. Mayer’s team put the car’s rear wings back on and he headed out for the afternoon race Saturday.  Unfortunately, that event also ended in a wreck after Mayer was fighting for a win. But the young man’s luck changed Sunday when he made a last-lap pass to earn victory.

Super Touring Under competitor Cameron Maugeri also saw a brighter Sunday. His Lotus Exige came to a halt early in Saturday’s race and he pulled off the circuit. The crew worked hard to correct the transmission problem so he could get back out on the 18-turn, 3.27-mile track Sunday, and Maugeri rewarded their effort with a win.

“It was really tough today,” Maugeri said after the race. “I hadn’t been on course since early Saturday and the track conditions really changed a lot. It seemed like everything changed. But it was good to bring home a win.”

Another driver that made the most of second chances was Tim Kezman. His Touring 2 Porsche held a substantial lead on the field Saturday, but Marty Grand in a Mitsubishi closed the gap and stole the win after a great battle. However, revenge was had by Kezman Sunday when this time he chased down Grand and made a pass that ultimately brought victory.

“We got a little snookered at the start today, but got our rhythm going, got back up to Marty and had a good race for a couple laps,” Kezman said. “Yesterday, I made a few mistakes and Marty got me. I simply couldn’t let that happen again today.”

Below are race results from Sunday’s SCCA U.S. Majors Tour at VIRginia International Raceway with Class: Name, Hometown and Car.