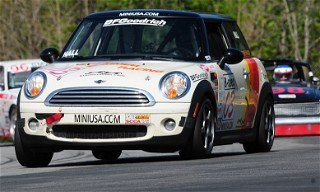 ALTON, Virginia (April 16, 2016) – The first two races of the day at VIRginia International Raceway for this weekend’s SCCA U.S. Majors Tour were anticipated to be exciting – and neither contest disappointed.

The afternoon opened with a Spec Miata race featuring a 38-car field filled with competitors hungry for a win. Selin Rollan sat on pole and was able to hold the lead early with teammate Andrew Carbonell and Dillon Machavern glued to his bumper. A six-car train formed at the front and pulled away from the rest of the field.

A few laps in, Carbonell went to the front. He and Rollan then created a fissure back to a five-car gaggle fighting for third. The gap didn’t hold, however, and soon it was Todd Lamb who held the front spot. But at the start of the final lap, Rollan was back in the lead, which he didn’t relinquish and claimed the unofficial win.

“It was an intense race,” a beaming Rollan said after climbing from his car. “The pack caught us and there was a lot of shuffling. I was down in fifth at one point, but made my way back up and eventually got the lead again. It was great.”

The second race of the day, which swelled with a 54-car field, contained the Spec Racer Ford and Spec Racer Ford Gen3 cars. With so many vehicles on the track, onlookers held their collective breath at the start hoping everyone would make it safely through the first turn. But that didn’t happen as a few Gen3 cars began to spin in front of the pack at the first turn’s exit.

The entire field queued up behind the pace car and waited for damaged vehicles to be removed from the circuit. At the restart, another group of drivers found themselves pointed in the wrong direction at Turn 1, but were able to get going and avoid another caution period.

Tray Ayres and Denny Stripling in their Gen3 steeds ran nose-to-tail for a portion of the race. When the checker flag waved, it was Ayers at the front. Cliff White then claimed the win in the SRF Class.

It wasn’t only the “spec” cars that generated great racing Saturday on the 18-turn, 3.27-mile road course in Alton, Virginia. The Touring 2 Class proved interesting, too. At the start, Tim Kezman in his Porsche jumped to a lead and put some distance between himself and second-place driver Marty Grand in a Mitsubishi. About midway into the race, Grand reeled Kezman back in and soon found himself in the lead. Kezman, however, didn’t give up and stuck with Grand around the twisty course, eventually reclaiming the lead in Turn 3 after Grand stumbled. At the finish, however, Grand had again secured the lead and a victory.

“We had two totally different cars going at it out there, and I think we changed leads about five or six times,” Grand said as he waited for the victory circle celebration to begin. “It was really, really close racing. But we never touched. It was just a great race.”

Sunday holds a second day of SCCA U.S. Majors Tour competition at VIRginia International Raceway with 35-minute (or 16-lap) races beginning at 9:05am ET. More information can be found at SCCA.com/majors.