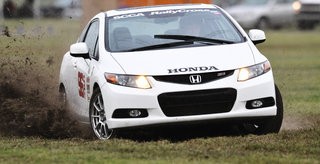 “We’ll be adding some new technology to RallyCross National Challenge events this year, and managing administration functions such as registration and operation,” Duncan said. “The goal is to mimic the success we’ve developed at the RallyCross National Championship and further fine-tune those procedures. Overall, I believe involvement from the National Staff will bring added value to the program as a whole and enhance the experience for competitors.”

Of particular note will be the addition of live timing at events. Competitors will be able to monitor up-to-the-minute results easily through a smartphone or laptop computer. Additionally, National Staff will utilize a Garmin VIRB XE camera to document course layout and changes that can be viewed by drivers through the SCCA website before runs begin.

This year, Friday will be open “Test & Tune” days followed by competition on Saturday and Sunday. Each weekend there will be three unique course layouts, and drivers will get three shots at each configuration. Runs are timed to 1/1000th of a second with missed “gates” resulting in a 10-second penalty. A DNF is posted if five gates are missed in a single run. Class winners are based on the total time of all runs Saturday and Sunday.

There are nine RallyCross Classes in which drivers can compete, and Classes are categorized according to a vehicle’s driveline configuration, level of modifications and style of tire deployed. Entry is capped at 125 competitors per event.

RallyCross is the SCCA’s most widespread and readily accessible form of extreme dirt motorsport. The activity is a scaled down version of a rally stage laid out on a non-paved plot of land where the course is delineated by traffic cones instead of trees or rocks. Participation requirements are considerably less than those associated with other forms of performance rally, so drivers usually only need a mechanically sound, hardtop vehicle and a helmet to come play in the dirt.

The SCCA RallyCross National Championship will wrap up the season September 30-October 2 at the National Balloon Classic venue in Indianola, Iowa. But there are plenty of opportunities for people to have fun in a field before then at the following events: