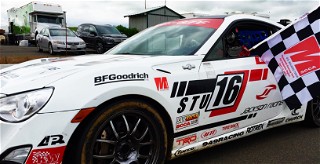 Seventeen drivers managed to claim wins on both Saturday and Sunday. Of particular note is Tom Wickersham who racked up four victories in all, two in Touring 3 and another two in the Touring 4 Class. This duplicates Wickersham’s performance from earlier in the year when he pulled off the same feat during Round 3 and Round 4 of the Western Conference U.S. Majors Tour at Willow Springs International Raceway.

Another driver who had a unique back-to-back performance at Thunderhill was Todd Harris. The Spec Racer Ford Gen3 winner from Saturday turned around and jumped in a Spec Racer Ford on Sunday to claim a second triumph.

“We’re going to the Runoffs at Mid-Ohio this year and plan on running in both Spec Racer Ford Classes,” Harris said at the conclusion of racing on Sunday. “Thought it would be good to get time in both cars this weekend. Plus, it’s fun to get a double win.”

Following are race winners from Sunday’s Round Six of the SCCA Western Conference U.S. Majors Tour on the “Five Mile Track” at Thunderhill Raceway Park with Class: Name, Hometown and Car.