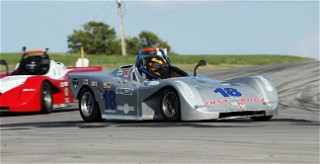 JENNINGS, Okla. (April 10, 2016) – The Green Country Region of Oklahoma is transforming from the drab browns of spring to the vibrant green hills that the region is known for. The Green Country Grand Prix has been a spring tradition for Midwestern Sports Car Club of America drivers nearly as long as they’ve been racing at Hallett Motor Racing Circuit. For five years the spring tradition has been a stop on the SCCA U.S Majors Tour.

The wind that highlighted yesterday’s Majors races continued today with the threat of rain shower late in the evening. Early overcast skies opened up late in the morning to reveal bright blue sky and consequential warmth. Between the wind and the sun, most participants are driving home with some evidence of their weekend in the Oklahoma weather on their arms and faces.

Yesterday’s Formula F back and forth battle between four closely-matched cars contrasted drastically with today’s contest in the same class. Hans Saurino was able to take and hold a commanding lead from start to finish. Later the day, brother Joshua was able to capture the Formula Continental victory. That made a win each for the three brothers through the weekend: Nigel (FC), Hans (FF), and Joshua(FC).

Group 6 held a wide variety of cars and classes: from Touring 2 Corvettes to B-Spec Fiestas. In Super Touring Lite, naturally aspirated, under two liter cars are grouped together in a class designed for tuners and builders. Yesterday Cliff Ira had clutch difficulties, giving Brian Laughlin a smoother route to the win in his Tulsa Radiology Associates Mazda Miata. Today, Ira started on the pole in his Fira Motorsports Acura Integra GSR and appeared to have control of the race. Then, on lap 13 the pair caught a tricky group of lap traffic which allowed Laughlin to execute the pass and set a sizable gap. Ira was not able to recover from the setback, allowing Laughlin to claim his second win of the weekend.

The final group of the weekend featured Spec Racer Fords of both the 2nd and 3rd generations. Gary Glanger set a flying time in his Busybody Fitness Equipment SCCA Enterprises SRF Gen 3 yesterday morning to sit on the pole for that race, but was only able to scrounge a third place finish behind Richard Stephens and Chris Funk. Today, he again started from pole position. This time he was first into turn one and never gave it up. Richard Stephens attempted to claim the follow-up win in his Dalrymple Racing Services SCCA Enterprises SRF3 with a pass coming out of the last turn, but came up just a few feet short. The official margin of victory was 0.294 of a second.

Racing in the SCCA U.S. Majors Tour Mid-States Conference continues April 30-May 1 at MSR Houston. More information on that event and the U.S Majors Tour can be found at SCCA.com/Majors.