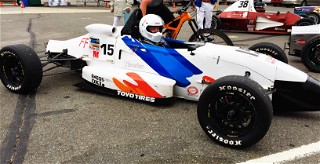 WILLOWS, Calif. (April 9, 2016) – Magnificent last-minute moves were the theme on a cool, gray, overcast opening day of competition during Round Five of the SCCA Western Conference U.S. Majors Tour taking place on the “Three Mile Track” at Thunderhill Raceway Park in Willows, California. Spec Racer Ford, Super Touring Lite, Formula Vee and Touring 3 were just a few of the Classes that saw lead changes on the very last lap of races.

Tom Wickersham in his Ford Mustang held the lead for most of the Touring 3 race. But toward the closing laps, Scotty B. White, also in a Mustang, closed the gap. White was actually able to take the lead on the final lap, but Wickersham worked his way back around in the last few corners to reach the checker flag first. That was one of two wins Wickersham had on the day, the other being in Touring 4 driving a RX-8 Mazda.

In the Super Touring Lite Class, David Vodden's Mazda Miata was leading when his vehicle began to emit smoke with only a few laps left. Tim Auger, after leaving the track in his Acura Integra early on in the event, closed in and, sure enough, executed a pass on the white flag lap to claim victory.

“I got by in the last corners as Vodden’s car was smoking oil,” Auger said standing beside his vehicle after the race. “It was a hard fight to get back after going off, but I just put my head down and ran.”

Final lap fireworks also occurred in the Spec Racer Ford Class. Perry Richardson was in command for a great deal of the 25-minute race. But Ed Railton and Jake Pipal hooked up nose-to-tail in the last third of the event and closed in on Richardson. At the start of the last lap, all three competitors shot into Turn 1 next to one another. The battle raged on around the circuit, but Railton brought it home in first.

“That was a great race,” Railton said afterwards. “The guys I was racing with were phenomenal. It was a tough race to win, and one of my best races.”

Formula Vee drivers also added to last-lap excitement in their Class. Brian McCarthy, Dennis Andrade and Aaron Meyer ran close and fought for the lead through most of the event. A light mist that filled the morning air progressed to rain as the FV affair reached its conclusion. And once again on the final lap, the lead changed hands with Meyer claiming victory.

“The rain impacted us a lot on that final lap,” Meyer said after completing an arm-pumping cool down lap. “I was just trying to keep the car on the track, just take it easy. Both the other guys unfortunately spun, and I just kept it smooth back to the finish line.”

Round Six of the Western Conference U.S. Majors Tour continues on Sunday at Thunderhill with 35-minute races beginning at 12:20pm PT on the circuit’s “Five Mile Track.” More information can be found at SCCA.com/majors.

Following are race winners from Saturday’s Round Five of the SCCA Western Conference U.S. Majors Tour on the “Three Mile Track” at Thunderhill Raceway Park with Class: Name, Hometown and Car.