At A Glance: Hallett and Thunderhill Majors This Weekend 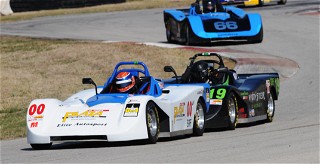 Twice the Majors Fun – Two SCCA U.S. Majors Tour Conferences are set for action this weekend. The Western Conference reaches its midway point in the 2016 schedule with a visit April 8-10 to Thunderhill Raceway Park in Willows, California. On Saturday, drivers will race counterclockwise on the “Three Mile Track,” which actually comes in around 2.8 miles in length. Then on Sunday, racers encounter a whole new counterclockwise challenge when they face the “Five Mile Track,” which settles in at a distance of 4.1 miles. Meanwhile, in the Midwest, Hallett Motor Racing Circuit is the site April 9-10 for Round 3 and Round 4 of the Mid-States Conference season. There, competitors will traverse the 1.8-mile track featuring numerous elevation changes.

SRF3 Hallett Hoedown – Twenty-Three Spec Racer Ford Gen 3 (SRF3) drivers are flocking to Hallett Motor Racing Circuit, giving them the largest class entry of the weekend. We have our eyes on new SCCA Enterprises President and CEO, Robey Clark along with Richard Stephens who calls the Hallett racetrack home. This class will undoubtedly be one to watch throughout the weekend.

Super Touring Lite Hallett Highlight – Many remember the 2014 Super Touring Lite (STL) Runoffs race for the dramatic fashion in which rookie Cliff Ira claimed the National Championship in his Acura Integra GSR. The silver medal was claimed by Brian Laughlin in his Mazda Miata. In 2014, Ira followed up his championship with a second-place finish at the Daytona Runoffs, while Laughlin took a year away from SCCA racing. The two meet up for the first time this weekend since their 1-2 finish at Mazda Raceway Laguna Seca. We will be following the nine-car STL field very closely at Hallett.

The More the Merrier – Executing two Majors events in one weekend is no problem thanks to the nearly 200 SCCA members that have stepped forward to volunteer their expertise and time at Thunderhill and Hallett. No matter where the SCCA races in the United States, the dedicated member volunteers can be found organizing, registering, scoring, officiating and flagging during race weekends. No event is possible without the help of these dedicated volunteers.