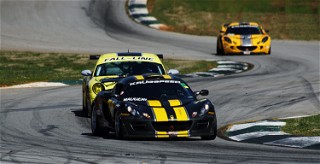 BRASELTON, Georgia (March 20, 2016) – It was a great day at Road Atlanta on Sunday for Round 8 of the Southeast Conference SCCA U.S. Majors Tour. But some drivers had a better day and weekend than others.

A handful of racers managed to take back-to-back, in-class wins on both Saturday (Round 7) and Sunday (Round 8) during the event. Those skilled drivers include: Chi Ho in B-Spec, Kevin Ruck in F Production, Alex Mayer in Formula 1000, Paul Schneider in Formula Enterprise, Jarret Voorhies in Formula Mazda, Stevan Davis in Formula Vee, Jeff Hinkle in GT-1, Jeff Dernehl in GT-3, Peter Shadowen in GT-Lite, Michael Crowe in Prototype 2, Jim Drago in Spec Miata, Casey Gunnell in Super Touring Lite, Cameron Maugeri in Super Touring Under, Tim Myers in Touring 1, and Tim Minor in Formula Continental.

But don’t think those double wins over the weekend came with ease. For instance, Ho in his B-Spec Honda Fit worked hard chasing down Ryan Hall in his MINI Cooper to take the lead, only to fall back into second with a few laps remaining. But when the checker waived, Ho had managed to regain the top spot.

“Ryan is a great driver and I just had to put my head down and do my best to close the gap,” Ho said sitting in his winning car after the race. “Easily the best race of my life.”

Ruck, too, had a great battle throughout the F Production contest. For a good portion of the race, Blake Meredith in a Honda CRX, Ken Kannard in his Mazda Miata and Ruck with an Acura Integra swapped the lead several times. Slower traffic became a strategic difference in the battle. But Kannard suffered a problem with only a few laps left, leaving Meredith and Ruck to fight on toward the finish. At the end, Ruck had his second weekend win.

“That race was really a lot of fun,” Ruck said after picking up his trophy and bottle of Mazza Sparkling Wine. “I really enjoyed it and super happy to get that win.”

Only one weekend remains in the Southeast Conference’s SCCA U.S. Majors Tour 2016 calendar. The final event, containing Round 9 and Round 10, will take place April 15-17 at Virginia International Raceway in Alton, Virginia. More information about that event and the entire SCCA U.S. Majors Tour can be found at SCCA.com/majors.

Following are the provisional race winners from Sunday’s Round 8 of the SCCA Southeast Conference U.S. Majors Tour at Road Atlanta, with Class, Name, Hometown and Car.

Photo: Cameron Maugeri in his black Lotus Exige was one of several drivers that took two class wins during the SCCA U.S. Majors Tour weekend at Road Atlanta.