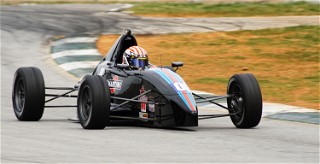 BRASELTON, Georgia (March 19, 2016) – His name wasn’t on the entry list. He didn’t preregister. He didn’t hit the track Friday for practice or even get into the car to qualify before Saturday’s Southeast Conference SCCA U.S. Majors Tour race at Road Atlanta. Alex Barron, the CART and IRL driver who has competed at the Indy 500, had to start at the back of the Formula F field. But none of that mattered.

In his first ever appearance at an SCCA U.S. Majors Tour event, Barron walked away with a Formula F win after a very thrilling performance. At the track to coach Formula Atlantic driver Keith Grant, who also won his race Saturday, Barron decided at the last moment to jump in the #00 Van Diemen RF00.

“Everyone was pretty bunched up out there. Classic Formula F racing,” Barron said after the event. “It was a last-minute thing, me getting into the race car, but I really enjoyed it and it was a great opportunity.”

But it wasn’t just Barron who put on a great performance Saturday during Round 7 of the Southeast Conference SCCA U.S. Majors Tour gathering. Competitors in Spec Racer Ford 3 (SRF3) gave the crowd some thrilling moments, too. Tray Ayres and Robeson Clay Russell were at the front of a group of SRF3 drivers for the first part of the race. Slowly, however, Russell and Ayres created some space and began battling back and forth to hold the lead. But toward the end of the race, Russell fell off the pace and Ayres emerged the victor.

“It was surprisingly slick out there today even though it wasn’t that hot out,” Ayres said. “Clay was giving me all I could handle. We were really close all race.”

And perhaps it’s no surprise that another great race from the first day of competition at Road Atlanta was put on by the Spec Miata class. There, a group of 10 or more cars were nose-to-tail lap after lap. But former SCCA Runoffs National Champion Jim Drago pulled out a lead on the last lap and held that gap to claim the win.

“It was a really, really good race,” Drago said. “It was very tough, but I was able to make no mistakes and give myself a little breathing room.”

Round Eight of the Southeast Conference U.S. Majors Tour continues on Sunday, March 20 at Road Atlanta with 20-lap or 40-minute races beginning at 8:15am ET. More information can be found at SCCA.com/majors.