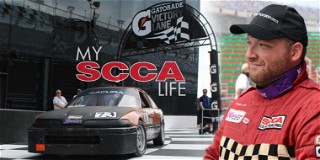 This article first appeared in the February, 2016 edition of SportsCar Magazine. SCCA members can read the current and past editions of SportCar digitally here after logging into their account; To become an SCCA member and get SportsCar mailed to your home address monthly in addition to the digital editions, click here.

“I definitely got my original gear-head interests from my dad, who owned various classic cars and motorcycles when I was growing up. The biggest constant, though, was our family vehicles always being Hondas – and as a teenager, I found myself into the budding Honda sport compact scene, learning how to make these mundane cars into potent machines.

During all of this, I never missed a World Challenge, Grand-Am, or SCCA Runoffs event at Mid-Ohio, where these production-based racecars battled it out on track, and I found myself wanting to experience racing for myself. My dad and I began running track days once I turned 18, and I soon after we discovered SCCA Solo, became a Club member, and never missed an event – but I still longed to be on track.

Eventually, I found a 1985 Honda Civic ITC car with a straight body, stout cage, trailer, and tons of spares for $3,500! Perfect for a 20-year-old engineering student! We dove in and quickly discovered a learning curve that was steeper than I ever imagined. I vividly remember being six seconds off the pole – set by someone in the same car as me – and thinking, ‘What else could that guy possibly be doing that I’m not? I put gas in my car and set the tire pressures and everything!’

Eventually, you come to the ugly realization of how little you actually know, and it wasn’t until my focus became more about what else I could learn and do, did success really start to come in Club Racing. Fifteen years later, this the 2015 Runoffs was my 200th SCCA Club race. It was also the second time I’ve been fortunate enough to win a Runoffs gold medal.

After all those races, however, the memories that resonate the most are more about the people I’ve met along the way and the great relationships I’ve developed. Going to an event nowadays is just as much about catching up with these good friends as it is about the competition. I wouldn’t trade that for anything, and it’s why there aren’t many places I’d rather be than at the racetrack.”