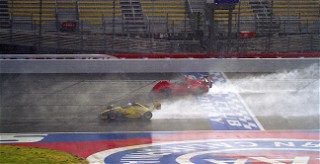 FONTANA, Calif. (January 31, 2016) – The day’s biggest winner during Sunday’s Round Two of the SCCA Western Conference Majors Tour may have been the California drought, as rain fell throughout the day at Auto Club Speedway.

The rainstorm that settled over the track factored into the day, both on the track, and those who chose to sit out Sunday’s race.

The wet track also provided an opportunity for drivers to show off their skill, and 27 drivers earned wins in the tough conditions.

One of those drivers who performed as well in the rain as he did in Saturday’s dry races was Tom Wickersham, who garnered his third weekend win by splashing to a Touring 3 win. In a group that also included the faster Touring 1 and Touring 2 classes, Wickersham drove his No. 01 Maine Straight Racing/Competition Autowerks/BFGoodrich Tires Ford Mustang to an overall podium spot in addition to his class win.

What appeared to be a rain issue at first glance, wasn’t, in the GT-2 race. Scotty White’s No. 0 Got CDL?/Knight Transport/BFGoodrich Dodge Viper led most of the rain-soaked big bore race overall, but spun two laps from the finish. Though he quickly rejoined, still in the lead, his pace was considerably slower. With Dylan Doherty’s No. 24 CPR Classic Sales Porsche 911 closing down on him, White pulled off with a mechanical issue on the final lap and saw Doherty take the win.

Spec Miata was most definitely influenced by the rain. No fewer than four front runners spun while battling for the lead, including eventual winner Dean Busk. Busk looped his No. 7 Commercial Brokers Spec Miata early, but used others’ misfortune to work back to the lead. With two to go, Busk was battling a hard charging the No. 11 Mazda Miata of Justin Hall. Hall got side by side with Busk coming out of the final turn, but Busk got the run and to the checkered flag first.

Multi-time National Champion Mike Miserendino has carried the target of the Southern California Spec Racer Ford community for years, and the move to the Gen 3 machine hasn’t slowed that down.

Miserendino slowed his No. 11 MBI Racing Spec Racer Ford in the closing laps, and still had a cushion large enough to win by 3.7 seconds at the checkered flag.

The Western Conference Majors Tour continues with Round Three and Four at Willow Springs International Raceway, February 20-21. More information on the SCCA Majors Tour, including event results and race winner interviews, can be found at SCCA.com.